After its “Miami Vice” makeover, Miami Beach experienced an artistic Renaissance in the 1990s.

2008 — Hosted by TV-star, model, and Pop Fashion Icon HEIDI KLUM, and featuring a live performance by USHER, offering a song and dance accompaniment to a perpetual stream of well shaped, half-naked young women, who strut confidently, working to sell their fashionable wares, and all the while, looking good.

Take A Walk On The Dark Side

One Night In Miami

Sept. 28, 1984 — After the now legendary, opening credits, the first scene in the Miami Vice pilot was set on Ocean Drive at one of at least the 30 Art Deco Hotels built on Miami Beach in the 1930s. The Carlyle Hotel, with a hot-pink, neon sign that boldly marks the now (Birdcage) legendary spots on Miami Beach. In the first Miami Vice shot, the camera pans down panning down to Sonny Crockett (Don Johnson), Miami’s most fashionable cocaine cop, smoking a cigarette, and annoyed by a group of break-dancing, South Florida B-Boys, with the obligatory, obnoxiously loud, ’80s-ready boom box.

Snow Blind
(November 23, 1981) — Time Magazine describing Miami as a city awash in cocaine, and noting its ranking as “The Murder Capital of the World,” was the biggest blow to South Florida’s most important tourism industry.

“Cocaine Cowboys” (2006) The story of a city addicted to the 1980s’ social drug of choice. A city caught in the crossfire between the Colombian and Cuban murderous gangs, who reigned a terrifying, machine gun hurricane of flying lead, down upon an increasingly paralyzed neighborhood. Fighting, with no care for human dignity and life, for dominant control of Miami’s billion-dollar drug business.

• back to the beginning

After World War II, Miami Beach experienced its first post-depression influx of population and culture, fueled mostly by returning soldiers who had been sent to South Florida for their basic training, before joining the fight in Europe and the South Pacific.

Throughout the post-war 1940s, Life Magazine assigned a number of tourism, fashion, and lifestyle stories focused on Miami Beach.

• Ocean Drive 20th Anniversary Party / a straight-strobe “look” at who was there.

1960s — COLLINS AVENUE was the perfect backdrop for the jet-setting lifestyle portrayed on television at the time. Frank Sinatra and Eva Gardner were frequent guests, and the entire RAT PACK performed and partied frequently at the Eden Roc and Fontainebleau hotels.

Like all of Miami Beach, the [1970s] saw a lull in the Collins Avenue action, but with the arrival of Miami Vice [1980s] after the [1990s] Renaissance and moving into the New Millennium the Fontainebleau came back in the most glamorous and celebrated way, as seen in the Victoria Secret Video here.

Living And Dying On Ocean Drive

THE FASHION INDUSTRY’S CLOSEST THING TO A SECOND COMING

VH1-Fashion Television did a South Beach feature story (1992), including an interview with Gianni Versace, and guests at the opening of his Miami Beach boutique in the heart of South Beach, Collins Avenue & 4th Street.

The height of Miami Beach being the “glamorous” media’s center of attention, was when Italian Fashion Icon Gianni Versace bought a $33-million home on Ocean Drive and opened his own “Flagship” Boutique in the heart of South Beach, at Collins Avenue & 4th Street.

Unfortunately, less than four years later, on a quiet Sunday morning, Versace was executed on the steps of his Ocean Drive home.

It was immediately after, when the media, in its (reality show-feeling) coverage of a nation-wide hunt for Versace’s Killer, became more “ugly” than “glamourous.”

Versace with Claudia Schiffer and Naomi Campbell in Milan (1996).

One typical Summer day, after his routine morning of coffee and reading at the NEWS CAFE, a popular breakfast spot just two blocks north of Versace’s home.

It was there, at the coral steps, where Andrew Cunanan, after stalking Versace for thousands of miles, casually and silently walked up from behind and shot Versace in the back of the head.

It was learned that Cunanan had been obsessed with Versace, and had stalked the designer for months before taking his opportunity to shoot and kill him on Miami Beach.

THE END of the man hunt found Cunanan dead (of a self-inflicted gunshot to the head) in a Collins Avenue houseboat, near the Eden Rock and Fontainebleau hotels, less than two miles north of Versace’s Mansion.

• back to the beginning

1950s — Morris Lapidus brought to Miami Beach, which until then had been known for its collection of historic Art Deco hotels.
Lapidus was the artist who launched a Modernist Style that took Miami Beach to the next higher level.
Fontainebleau Hotel
Eden Roc
Lincoln Road
with its shops, restaurants, nightclubs, and theaters, on the north end of the South Beach neighborhood.

Morris Lapidus (November 25, 1902 – January 18, 2001) was an architect, primarily known for his Neo-baroque “Miami Modern” hotels constructed in the 1950s and 60s, which have since come to define that era’s resort-hotel style, synonymous with Miami and Miami Beach.

1960-1962 — Surfside 6, Television series about two detectives living and working aboard a houseboat moored directly across the street from the hotel. Supporting character Cha Cha O’Brien was an entertainer who worked at The Boom Boom Room in the hotel. Only establishing shots of the hotel were used; the series was filmed entirely at Warner Bros. studios in Burbank, California.

1978 — Stephen Muss bought the Fontainebleau Hotel for $27 million, thus rescuing it from bankruptcy. He injected an additional $100 million into the hotel for improvements and hired the Hilton company to manage it. In 2005, the Muss Organization sold the Fontainebleau to Turnberry Associates for $165 million.

The Way It Used To Be
Long since gone, lost to 2008’s “renovation,” Richard Haas’ Fontainebleau Hotel mural had stood as one of Miami Beach’s most iconic pieces of architectural art.

A Meeting of  Graffiti Minds

In The Open / Underground

Gallery Of The Unknown Artist 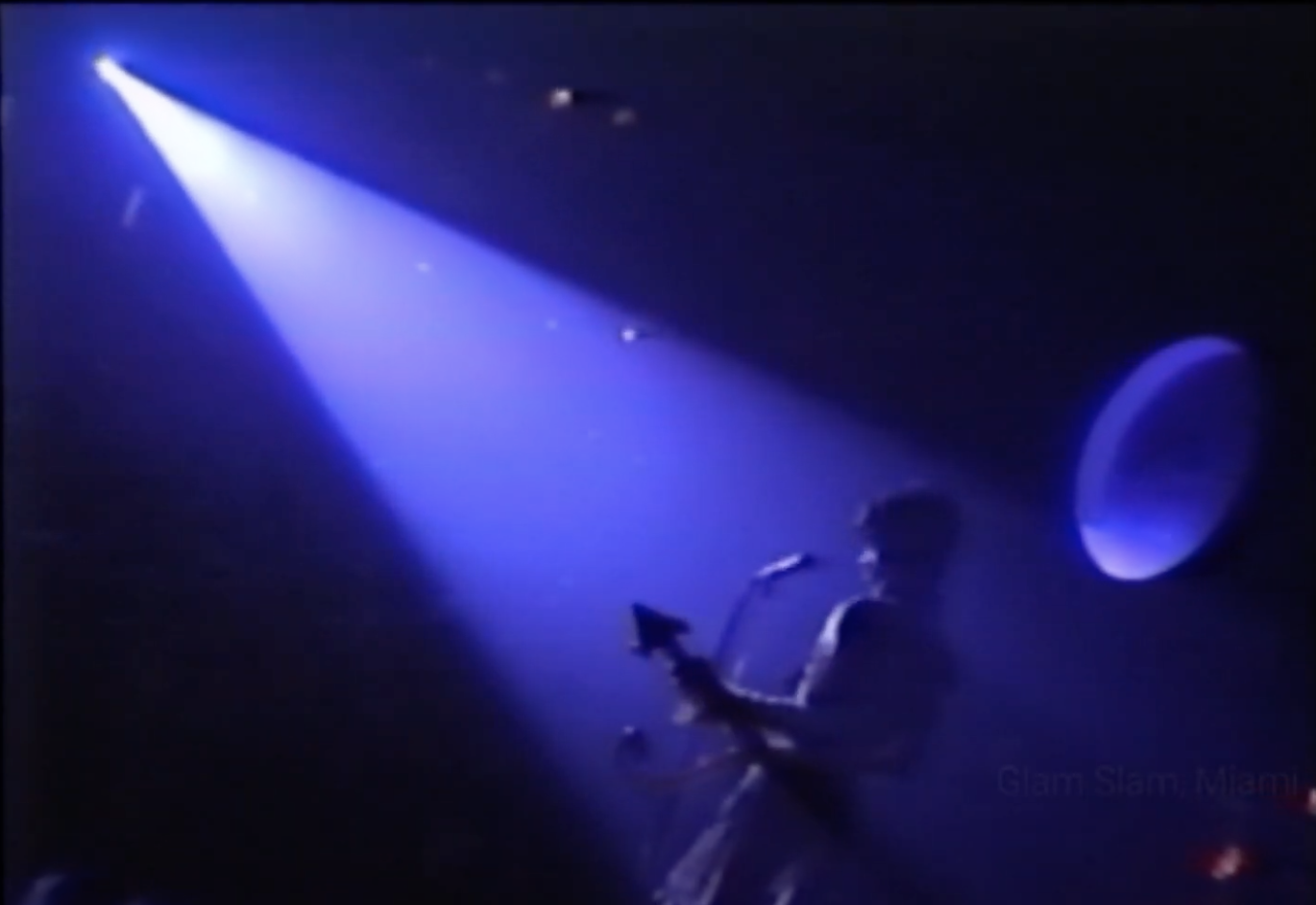 “The Ride” — The three years (1994-1997) Prince had his Glam Slam club on Miami Beach’s Washington Avenue, Prince set aside two nights for himself, to celebrate his birthday (June 7).