The history of photography timeline is a history of art and science together.

Many photography timelines start with the first known photograph by Nicéphore Niépce in 1827. But it actually goes much further back than that. It goes back to a time and technology before lenses, cameras, and even film.

The camera obscura was a tool used by some artists that allowed them to easily draw or paint realistic landscapes and rendering of architecture. In its simplest form, a pinhole projects a scene in a dark room or box that the artist can basically trace over.

Since the word photography is literally defined as drawing with light, we can look back at the concept of the camera obscura as a possible beginning for our timeline of photography. The earliest historical mention of the idea dates back to China in around 500 BCE.

Near the start of the 16th Century, the amazing artist, scientist, and inventor Leonardo da Vinci sketched out diagrams and wrote instructions about the camera obscura. In these papers, he included not just pinholes but also simple glass lenses.
Lenses and optics were a relatively new but established science by that time period, being used by astronomers to broaden our knowledge of the universe. Interestingly for our history of photography timeline, astronomers were also a driving force behind the advent of film.

Did you like that pun? Johannes Kepler, an astronomer and generally all around smart guy, gets credited with coining the term photograph for a drawing with light in 1604. He was referring to using telescopic optics to project an image onto a sheet of paper or a canvas to draw the stars.

Astronomers and inventors sought a way to make the paper or canvas itself sensitive to light. Glass or metal plates were also used in experiments by various people.

1717 — Johann Heinrich Schulze showed that a solution of silver nitrate darkens when exposed to light. The problem now was how to stop the solution from continuing to darken to light, in other words, how to fix the image to the medium. 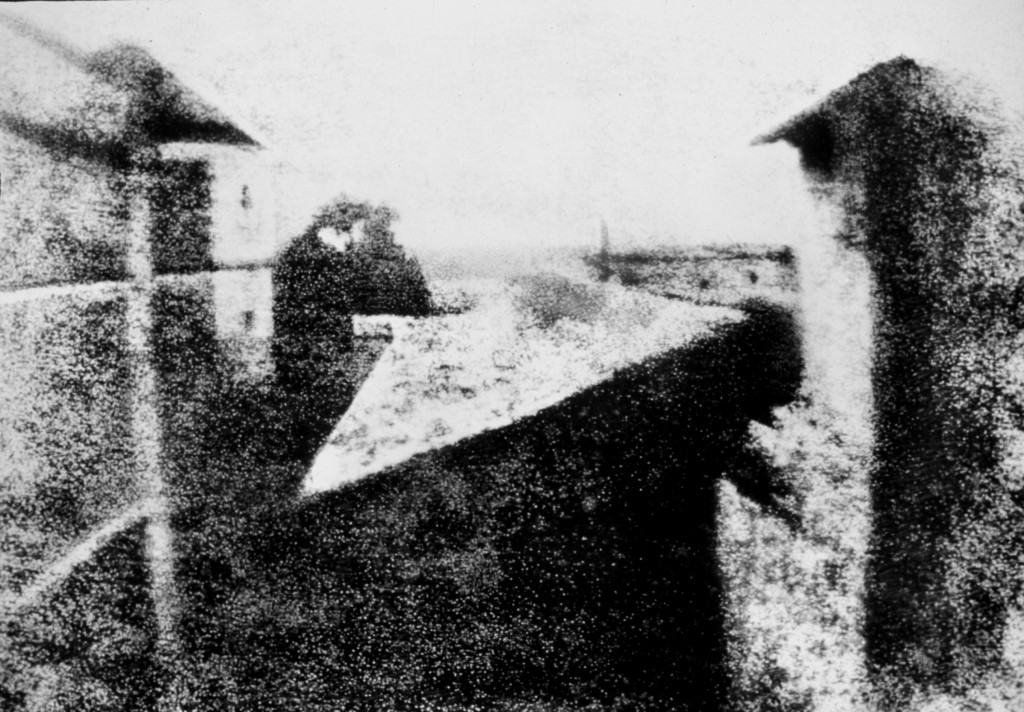 1827 — It was just one in a series of experiments, but View from the Window at Le Gras is the earliest surviving photograph. Nicéphore Niépce used a sheet of metal with a film of chemicals spread on it.

Though light-sensitive, it wasn’t very sensitive. It took 8 hours to record the image. You can see sunlight illuminating both sides of the buildings.

From here on, the timeline of photography moves rapidly.

Different metal plate technologies began to be used by astronomers, other scientists, and a new breed of artist/scientists, the naturists. The naturists were quite often scientists and inventors themselves, using this new technology to record the beauty of the world around them.

1839 — The word photography was used to describe the new picture-taking (making?) industry. The popular metal plate process known as daguerreotype made the mix of art and technology available to the masses.

Well, the masses that could afford the time and money involved anyways. Though it may have been one of the easier metal plate photographic processes, it was still messy, expensive, very time consuming, and somewhat dangerous.

1841 — Photographers of this era generally used cameras designed and made by themselves or skilled craftsmen (like a violin), adapting lenses made by optical manufacturers to use photographically.

Early in the camera timeline of the history of photography were optical companies such as Zeiss, Leitz, and others starting to design lenses specifically for photography. Voightlander went a step beyond and introduced a camera for metal plates in 1841.

Written journalistic descriptions and hand-drawn or painted illustrations were replaced by photographic images. These images were displayed in public shows and published in newspapers and magazines.

1835 – 1887 — Metal and glass plates were fragile, cumbersome and hard to work with, and somewhat costly for the average person. A more accessible method continued to be looked for by photographers.

A combination of two technologies, silver halides and celluloid based emulsions continued getting improved upon.

In 1835, Henry Fox Talbot invented a viable method of spreading a gelatine emulsion on paper. In 1839, astronomer John Herschel came up with a way to fix the image recorded by silver halides.

photo by juankphoto via iStock

In 1887, these two technologies were first manufactured together as a photographic film. This film could be produced in individual sheets or as a roll.

1888  — George Eastman of Rochester, New York had an idea. Use this new roll film, build a simple, easy-to-use camera, and market it as a fun use product. In the history of photography, Eastman was a master of marketing photography to the masses. “You push the button, we do the rest.”

Eastman Kodak became a driving force in the worldwide boom of photography. They introduced many different formats of films, both in rolls and sheets, as well as cameras for beginner, enthusiast, and professional photographers.

1878 – 1900 — Motion pictures, moving pictures, or movies are an entrenched part of the timeline of photography.

The question of how best to capture subjects in motion was first successfully answered by  Eadweard Muybridge in response to settling a bet about horses hooves and galloping. The things that move technology!

In short time, cameras and accompanying projects were invented to film continuous motion and display them by means of projecting onto a large screen. Later innovations such as sound recording get added in as well in due course.

35mm Film and the Leica:

1913  — One of the more common formats of roll film was 135 format, also called 35mm. This format was used primarily for motion pictures, but it also started getting spooled into small cartridges for miniature still cameras, as they were called then.

The movie cameras transported 35mm film through the cameras vertically, with an image frame of 18x24mm. In 1913, Oskar Barnack, an engineer at Leitz, designed a prototype still camera that transported the film horizontally, producing a 24x36mm image frame.

By 1925, the Leica I was introduced and became a commercial success. In time, the 24x36mm format became one of the most produced and used image formats in all of photography. This still holds true in digital cameras today.

1957 – 1959  — While many film and camera formats exist, 35mm became one of the most popular formats in our history of photography.

In 1957, the first eye-level viewing single-lens reflex camera with an instant return mirror was introduced by Asahi Optical of Japan, called the Pentax.

The year 1959 saw the release of the Nikon F, a professional-caliber 35mm SLR with an entire system of lenses, motor drives, and other accessories surrounding it.

Photo by Jonathan Talbert on Unsplash

35mm SLRs became one of the primary types of cameras for photographic images. Their form factor and image format are still one of the more dominant forces in modern digital photography.

1975 — The first known digitally recorded images were created in a Kodak lab in 1975 and it took 23 seconds to capture the 0.01 MP image. The camera was very basic but the recording apparatus weighed in at 8 pounds.

Among the first digital cameras of the 1980s and 1990s were several point shoot style cameras from computer makers and the bigger camera manufacturers. From about 1989 through to the early 2000s, Fuji and Kodak collaborated with Canon and Nikon to make digital cameras that fit into what professionals needed.

Nikon then introduced the D1 in 1999. This marked the first time that a major camera manufacturer on its own designed and built a camera specifically as a digital system camera.

By 2004, the sensor in the Canon EOS 1D Mark II had surpassed the resolving power of the former industry standard Kodachrome slide film. Digital was here to stay. DSLRs were pretty much taking over from 35mm SLRs.

Even though a lot of attention is given to 35mm format cameras, film or digital, many other formats exist. We can also look at the introduction of video recording for motion pictures.

One of the most interesting aspects of the timeline of photography is the modern smartphone. Just think, in our pocket we can carry a camera that records still images and video. We can then transfer these photos and movies virtually instantaneously to almost anywhere in the world.