December 1, 1955 — The day Rosa Parks refused to give up her seat on a bus in Montgomery, Alabama, wasn’t the first time she had encountered James Blake, the driver.
One cold, winter day, twelve years earlier, Rosa ignored the “rule” saying blacks could use the back door only, stepped onto Blake’s crowded bus, and extend her hand with the fare.
Angered by Rosa’s “uppity” attitude, Blake refused Rosa’s fare, and commanded she move to the back of the bus. Rosa stood her ground, and an angrier Blake slapped Rosa’s hand away.

Rather than give in to the racist bully, Rosa refused the ride. 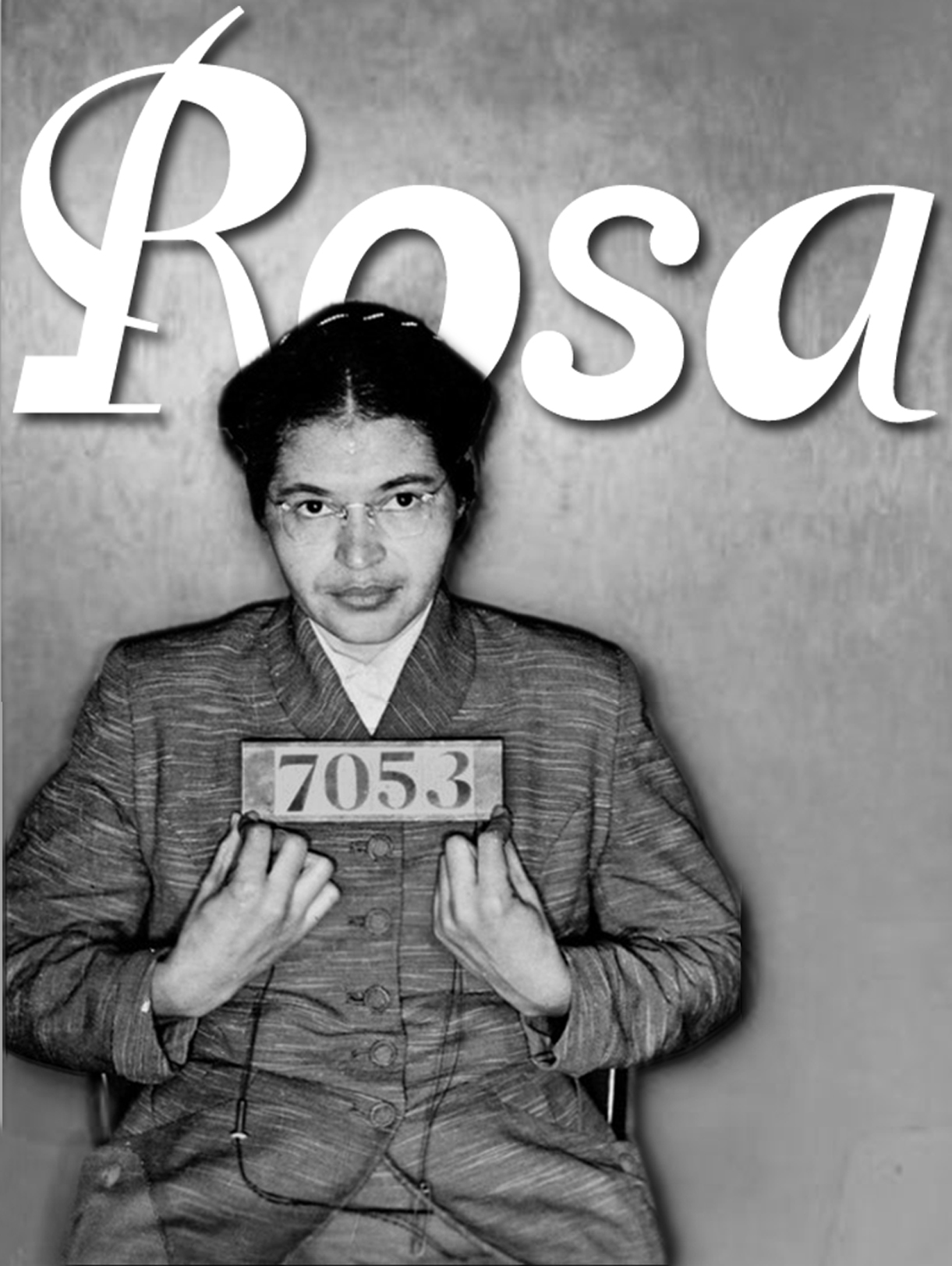 December 1, 1955 — Rosa Parks was on a city bus, commuting home after a long day of work at the Montgomery Fair department store. Many Black residents of Montgomery avoided municipal buses, finding the “Negroes-In-Back” policy demeaning. Nonetheless, most relied on public transportation and on a typical day, 70 percent were black.

On this day, Rosa Parks was one of them.

Segregation was written into law; the front of a Montgomery bus was reserved for white citizens, and the seats behind them for blacks. However, it was only by custom that bus drivers had the authority to ask a black person to give up a seat for a white rider.
There were contradictory Montgomery laws on the books: One said segregation must be enforced, but another, largely ignored, said no person (white or black) could be asked to give up a seat even if there were no other seat on the bus available.
Nonetheless, at one point on the route, a white man had no seat because all the seats in the designated “white” section were taken. So the driver told the riders in the four seats of the first row of the “colored” section to stand, in effect adding another row to the “white” section.

three others obeyed. Parks did not. 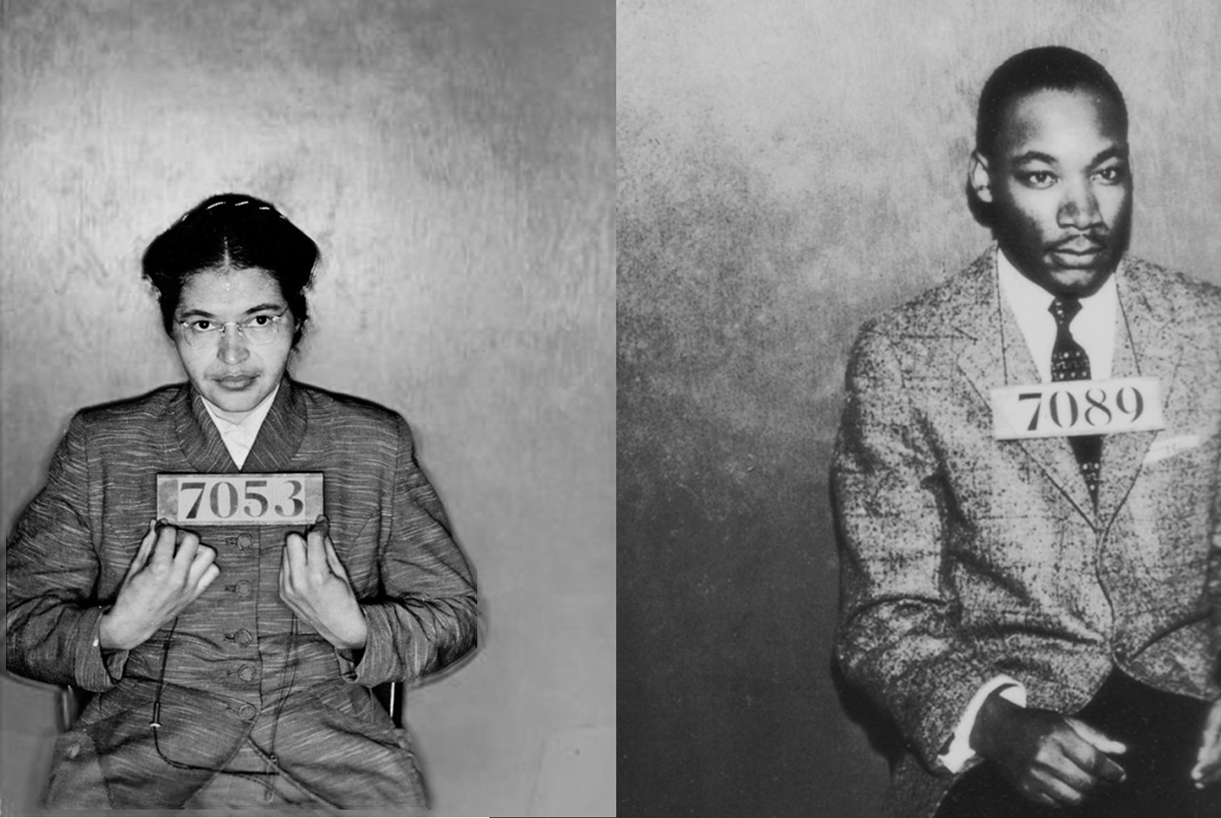 1956 — Martin Luther King Jr. and colleague W. J. Powell wrote a list of “Integrated Bus Suggestions” as guidance for how to practice non-violence activism when integrating the buses in the South.
One suggestion: “Be loving enough to absorb evil
and understanding enough to turn an enemy into a friend.” 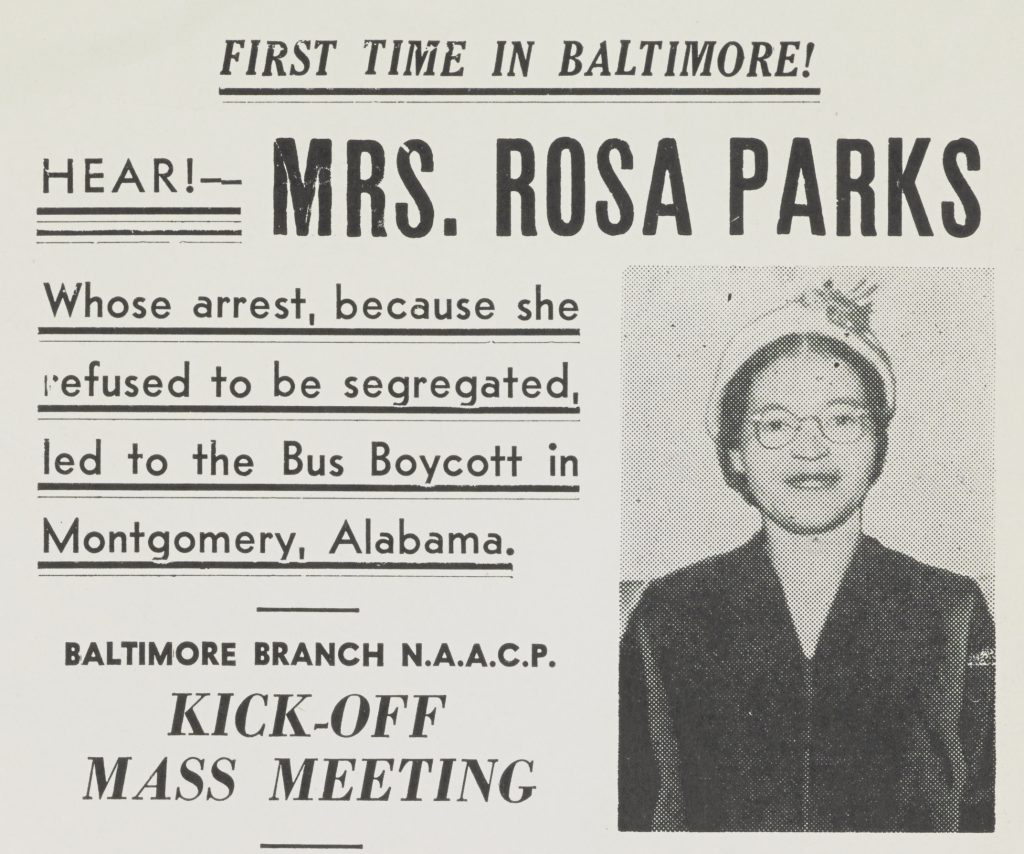 Although Parks used her one phone call to contact her husband, word of her arrest had spread quickly and E.D. Nixon was there when Parks was released on bail later that evening. Nixon had hoped for years to find a courageous black person of unquestioned honesty and integrity to become the plaintiff in a case that might become the test of the validity of segregation laws. Sitting in Parks’ home, Nixon convinced Parks—and her husband and mother—that Parks was that plaintiff. Another idea arose as well: The blacks of Montgomery would boycott the buses on the day of Parks’ trial, Monday, December 5. By midnight, 35,000 flyers were being mimeographed to be sent home with black schoolchildren, informing their parents of the planned boycott. 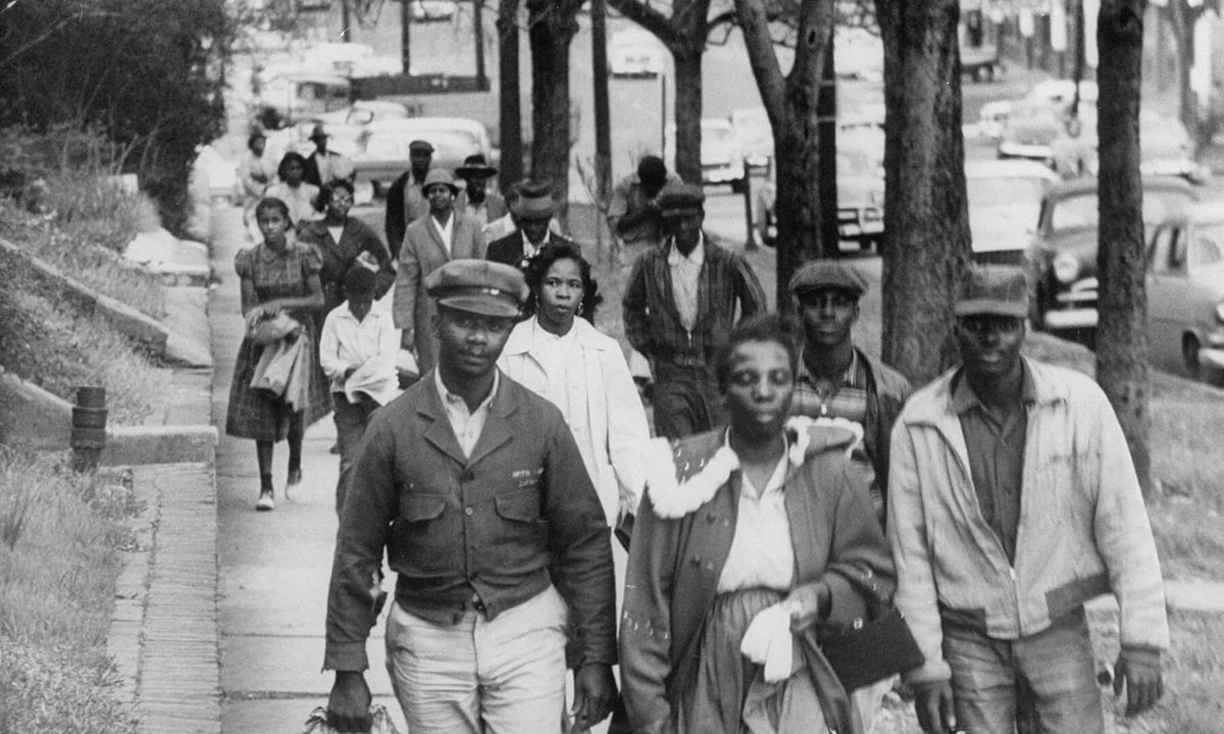 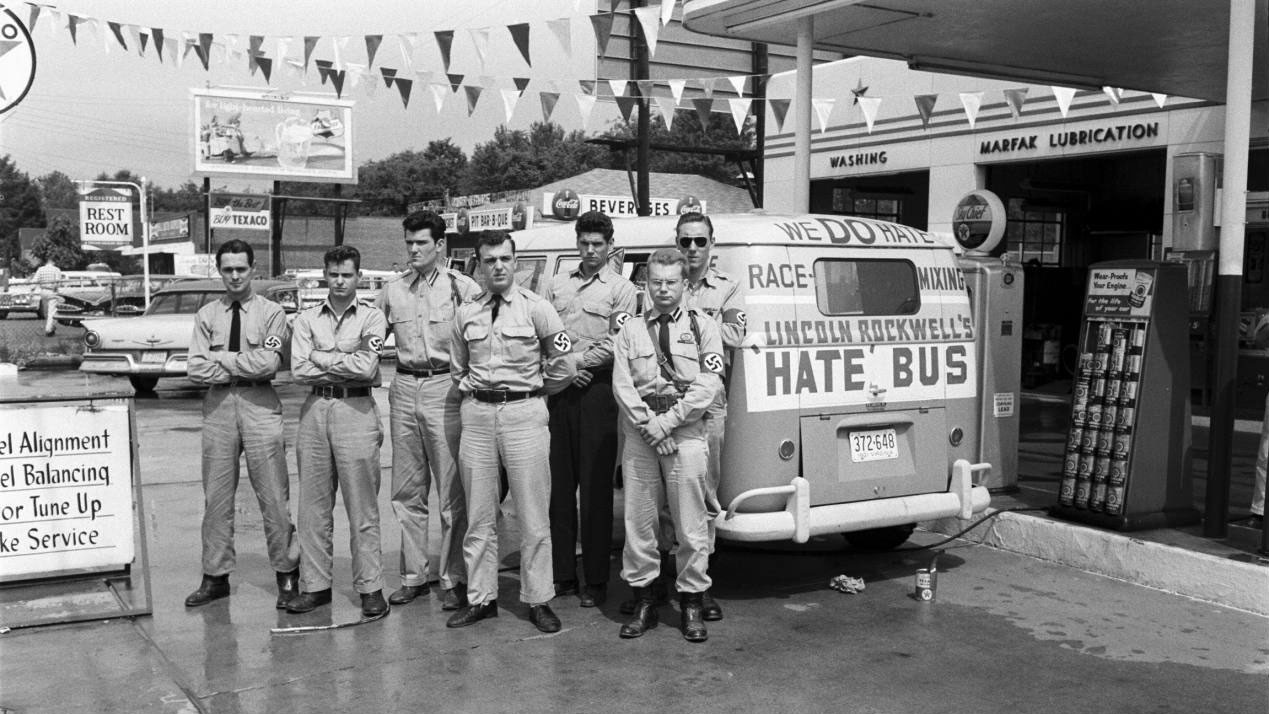 May 1961 — Members of the American Nazi Party, including driver John Patler (second from left), pose with their “hate bus” in  Montgomery, Alabama, en route to New Orleans. (Joe Scherschel/Life) 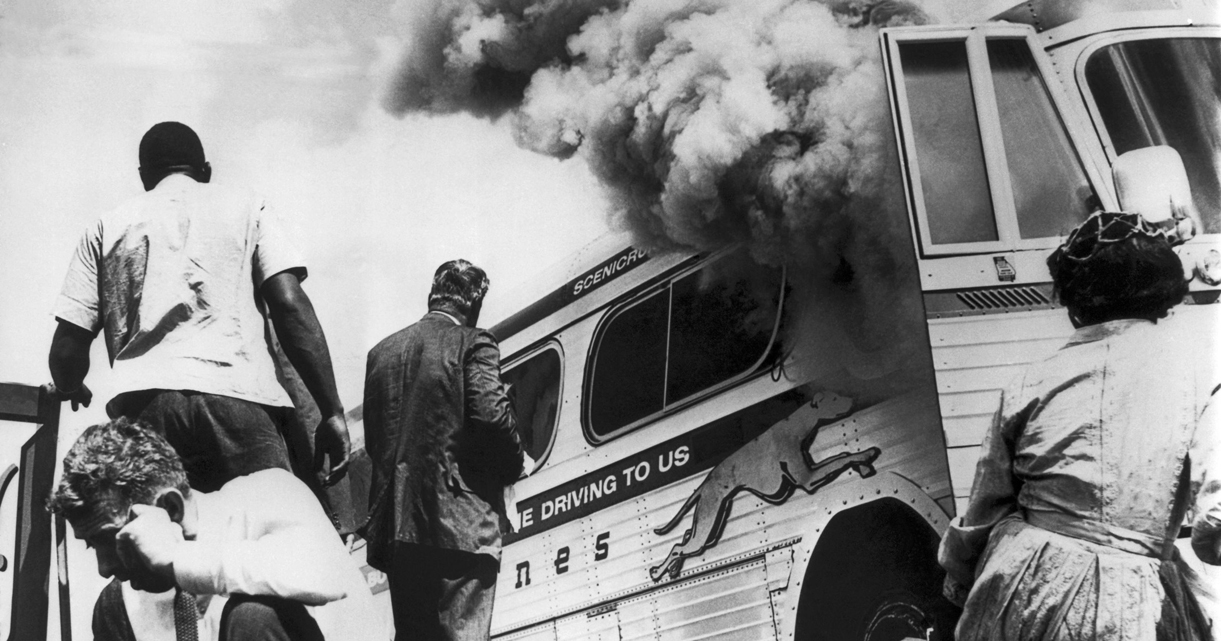 By refusing to give up her seat to a white man on a Montgomery, Alabama, city bus in 1955, black seamstress Rosa Parks (1913—2005) helped initiate the civil rights movement in the United States. The leaders of the local black community organized a bus boycott that began the day Parks was convicted of violating the segregation laws. Led by a young Rev. Dr. Martin Luther King Jr., the boycott lasted more than a year—during which Parks not coincidentally lost her job—and ended only when the U.S. Supreme Court ruled that bus segregation was unconstitutional. Over the next half-century, Parks became a nationally recognized symbol of dignity and strength in the struggle to end entrenched racial segregation.

Rosa Louise McCauley was born in Tuskegee, Alabama, on February 4, 1913. She moved with her parents, James and Leona McCauley, to Pine Level, Alabama, at age 2 to live with Leona’s parents. Her brother, Sylvester, was born in 1915, and shortly after, her parents separated.

Rosa moved to Montgomery, Alabama, at age 11 and eventually attended high school there, a laboratory school at the Alabama State Teachers’ College for Negroes. She left at 16, early in 11th grade, because she needed to care for her dying grandmother and, shortly thereafter, her chronically ill mother. In 1932, at 19, she married Raymond Parks, a self-educated man 10 years her senior who worked as a barber and was a long-time member of the National Association for the Advancement of Colored People (NAACP). He supported Rosa in her efforts to earn her high-school diploma, which she ultimately did the following year.

Raymond and Rosa, who worked as a seamstress, became respected members of Montgomery’s large African-American community. Co-existing with white people in a city governed by “Jim Crow” (segregation) laws, however, was fraught with daily frustrations: Blacks could attend only certain (inferior) schools, could drink only from specified water fountains, could borrow books only from the “black” library, among other restrictions.

Although Raymond had previously discouraged her out of fear for her safety, in December 1943 Rosa also joined the Montgomery chapter of the NAACP, and she became chapter secretary. She worked closely with chapter president Edgar Daniel (E.D.) Nixon. Nixon was a railroad porter known in the city as an advocate for blacks who wanted to register to vote, and also as president of the local branch of the Brotherhood of Sleeping Car Porters union.