for all movie time, florida has been a popular location.

• Seminole (1953) — Categorized as a “western,” Seminole was filmed in the Florida Everglades, and told the story of Osceola, the Chief who led the Seminoles in the Second Seminole War (1835-1842). 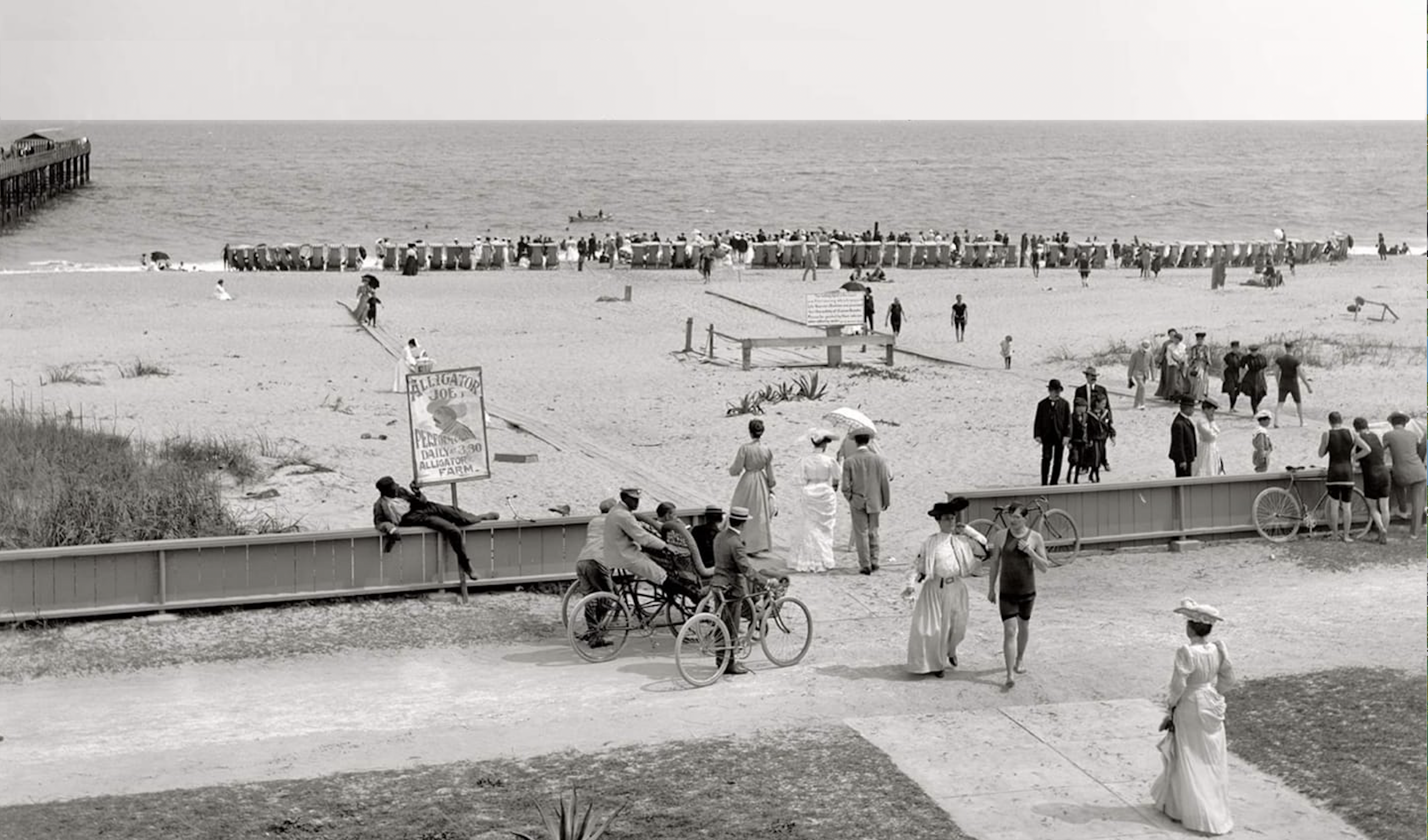 Fantasy Island
Palm Beach was Henry Morrison Flagler’s first real “stop” on his East Coast Florida Railroad, satisfying his aristocratic search for a tropical paradise. A comfortable location, where he and his more-than-wealthy New York buddies could build oceanside mansions (vacation homes) to where they could ride their own private rail cars down for what became known as “wintering” in Palm Beach. Such multi-dwelling living has since seen seasons used as a verb, as in: Are you “Wintering” in Palm Beach?
Flagler built the first, a grand, white, pillared structure he called “Whitehall.” His home was built with its back facing Lake Worth (The Intracoastal Waterway) with a narrow swath cleared through the jungle that crossed the entire barrier island, ending at the sandy beach on the Atlantic Ocean.

Blowin’ In The Wind
A list of (Hurricane) names, many Floridians would like to forget.
Donna, Andrew, Irma, Wilma, Ian …

MIAMI BEACH  — 1900
The Man Who Built Miami Beach (CARL FISHER)
JULIA TUTTLE  — 1903
A Pioneer Woman living in a small wooden home at the mouth of the Miami River, always with an interested in helping to develop her chosen Florida city. Keeping a close eye on Flagler and the progress of his railroad, when he made his stop in Palm Beach, Tuttle had an idea to lure him south, to Miami. Writing Flagler, she reminded him of the great freeze of 1885, that killed nearly all of Florida’s citrus, and that it had killed all the citrus north of Miami. She included a living branch of a local orange tree in her mailing.
Not only was Flagler easily persuaded to continue on the meet Julia in Miami, the arrogant dreamer he was, he saw Key West as his ultimate goal. Building a series of bridges crossing from one Florida key (small island) to another, ending on Florida (and the United States) southernmost point. Key West had become Flagler’s moon … the subject of an explorer’s most vivid dreams.
1910
• ZIEGFELD FOLLIES
Ziegfeld Girl (film) 1941
Ziegfeld Girl (trailer)
1920 — Prohibition
• HARLEM RENAISSANCE
THE COTTON CLUB
The Cotton Club (1984) trailer / info
The Cotton Club (History) 1920
• APOLLO THEATER
“Harlem Nocturne” b/ DUKE ELLINGTON
White Stand Up @ Apollo DC Benny
Bill Bailey (1955) Original Moon Walk
1930 — Radio Days
• RADIO DAYS (1987)
Radio Days (trailer)
Woody Allen
THE COTTON CLUB (History)
• KING KONG (1931)

Bungle In the Jungle
Much of what was called Africa in the first action/adventure movies, was shot a number of fresh water springs in the jungle of Florida’s interior. Among the most popular, were Silver Springs, Weeki Wachee, and Wakulla. 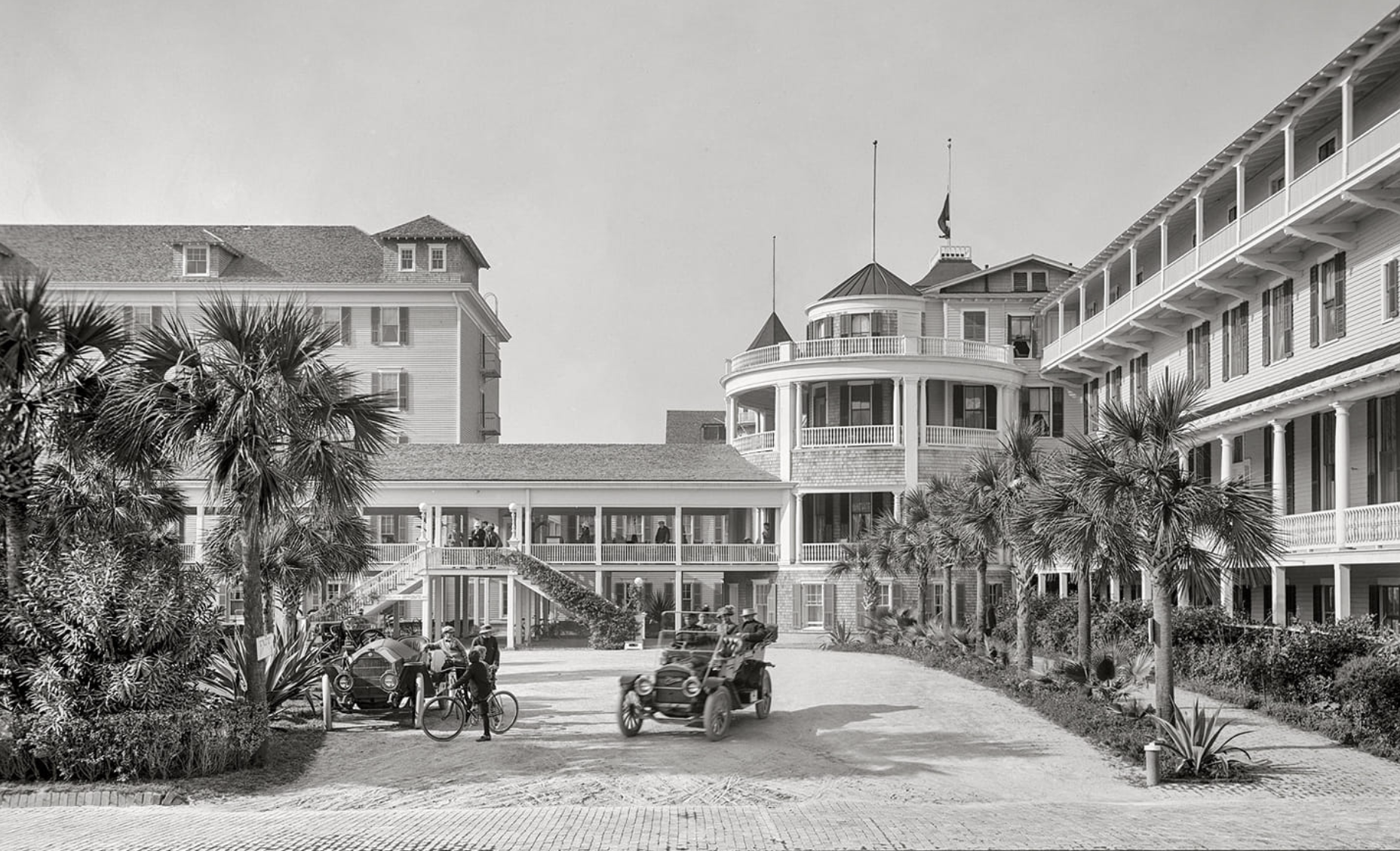 Florida Brain Trust
The Ormond Hotel was a favorite gathering spot for Henry Flagler, and his many inventive friends, including: John D. Rockefeller (who he was a partner with in Standard Oil), Henry Ford, Harvey Firestone, and Thomas Edison.

Quest for Speed
Decades before the Bonneville Salt Flats, those seeking what are called “land speed records” chose the wide, hard-packed, silty sand beaches on Florida’s East Coast, as the best place on planet earth that might satisfy their need (lust) for speed.

Hurricane History — From the wreck of the Treasure-Laden Spanish Galleon (Atocha), to (Andrew), Miami’s most devastating “natural” disaster, many first-named storms have taken their important position in Florida History.

1940
•Moon Over Miami(1941)Trailer
Betty Grable at the height of her million-dollar leg fame,
Picturesque movie set in South Florida

•THE PALM BEACH STORY (1942)
Screwball comedy film written and directed by Preston Sturges, and starring Claudette Colbert, Joel McCrea, Mary Astor and Rudy Vallée. Victor Young contributed the musical score, including a fast-paced variation of the William Tell Overture for the opening scenes. Typical of a Sturges film, the pacing and dialogue of The Palm Beach Story are very fast.

• I Dream Of Jeannie (Season 1 / Episode 1) — After orbiting in Stardust One, Astronaut Tony Nelson crash lands on a remote island in the South Pacific. On the beach, he finds a bottle and gets a surprise when he opens it. A beautiful genie appears who is instantly attracted to him, helps him get rescued and then follows him back to Cocoa Beach, Florida.

In a 50 year career, James Bond (007) made frequent trips to Miami, none so notable than his stay at Morris Lapidus’ Fontainebleau Hotel in the opening of 1964’s “Goldfinger.”

Much of the sequel takes place in 1950s Miami Beach and Havana, Cuba.

The Internationally Famous curved structure makes cameo appearances in many movies, and is the featured setting for Jerry Lewis’ “Bellboy,” made in 195 .

In a 50 year career, James Bond (007) made frequent trips to Miami, none so notable than his stay at Morris Lapidus’ Fontainebleau Hotel in the opening of 1964’s “Goldfinger.”

The Internationally Famous curved structure makes cameo appearances in many movies, and is the featured setting for Jerry Lewis’ “Bellboy,” made in 195 .

• Nude on the Moon

• Revenge of the Nerds II: Nerds in Paradise

• Smokey and the Bandit II

• There’s Something About Mary

Allan Arkush 3-minute “Where the Boys Are” documentary

Band of the Hand Trailer

Elvis Presley as a Miami Beach hotel worker and boat racer in the movie that finishes with a race at the Miami Marine Stadium. / TRAILER

Divorced mom Tracy Cross (Hawn) raises her 12-year-old son, Christopher (Arnott), in Key West in 1969 around the time of the Apollo 11 moon landing. Chris narrates the film in voiceover and talks about his “screwed up” life living with his mother in a cheap hotel.

• Flying Down to Rio

Diana Ross & The Supremes “The Happening”

• Nude on the Moon

• Revenge of the Nerds II: Nerds in Paradise

• Smokey and the Bandit II

• There’s Something About Mary

Allan Arkush 3-minute “Where the Boys Are” documentary

Where The Boys Are

Step Up Revolution made (very) good use of Ocean Drive and classic Art Deco Hotels as a back drop for the movie’s opening dance scene featuring hip-hop dancers and hydraulic low-riders and muscle cars.