When the Mercedes I ran aground on Palm Beach, crashing into the pool of Ted Kennedy’s neighbor, Mollie Wilmot.  in Palm Beach, Ms. Wilmot’s 15 minutes of fame had begun.

Lazing On A Sunny Afternoon 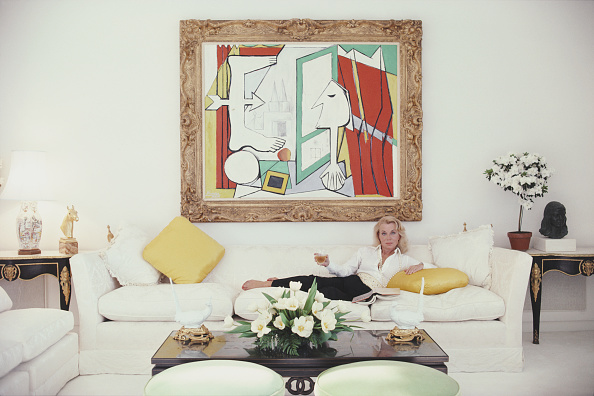 [1983] — Palm Beach socialite and so-called philanthropist, Mollie Wilmot, had always lived the “good” life on Palm Beach, with all its seasonal parties, and Bruce Sutka-designed charity balls. Here, stretched out under her magnificent Picasso, (‘The Artist Studio, The Open Window’) she enjoys an afternoon cocktail.

The next year (1984), the day after Thanksgiving, from the same comfortable spot in her luxurious Florida room, Mollie’s ocean view would change dramatically, and she would claim her much more than 15 minutes of fame.

Outside, the wind howled as Mollie Wilmot sat down with her family, for Thanksgiving dinner, 1984. Sitting comfortably, in a room that would attract many a museum’s envy, Mollie was unaware of the disabled Venezuelan ship, less than a mile offshore of her oceanfront mansion, struggling against an angry surf, doing its best to run the dilapidated vessel aground. With a broken engine, the small crew in a futile effort to stabalize the ship, dropped it’s woefully inadequate anchor. As the storm raged, and the night grew more eerie, Mollie and her company of family and friends reminisced, Thanksgiving-style, catching up on all the upper class gossip, family news, and party plans for Christmas. All had a celebratory “good” time, and as the day neared midnight, all were still unaware of the high seas drama unfolding just outside Mollie’s picture window.

The troubled Venezuelans struggled through the night, but had no luck in fixing their engine, and just before sunrise, the ship broke free of it’s tenuous anchorage, and unable to resist the still raging surf, was pushed hard, toward the Palm Beach shore.

Mollie was sleeping soundly when, just before sunrise, the boat finally broke free, and soon after, crashed onto the beach into Mollie’s ocean-side pool and cabanas.

The ship was the Mercedes I, and it had come ashore next door to the Kennedy Estate (JFK’s Summer White House in the ’60s, and then occupied by Senator Ted and his infamous nephew William Smith). The TV-friendly location insured that for the next six months (time it took a salvage company to remove the ship), MOLLIE AND THE MERCEDES WERE THE TALK OF THE SNOBBY TOWN.
PALM BEACH, A TOWN OF MONEY, LEISURE, AND SOCIAL IGNORANCE.

Guess Who’s Coming to Dinner?
loving every second of her 15-minutes (six months) of fame.
Parties, Press Conferences, and Peanut Butter & Jelly offerings to the marooned.
Mollie sells the (movie) rights to Disney.
The studio decides not to pursue the project.
Even so, Mollie made the most of her flash celebrity, “good” fortune, and spontaneous fame.
making the most of a freak accident
in a town already filled with freaks.