[ vice.] w/ Miami
1. an immoral or evil habit or practice 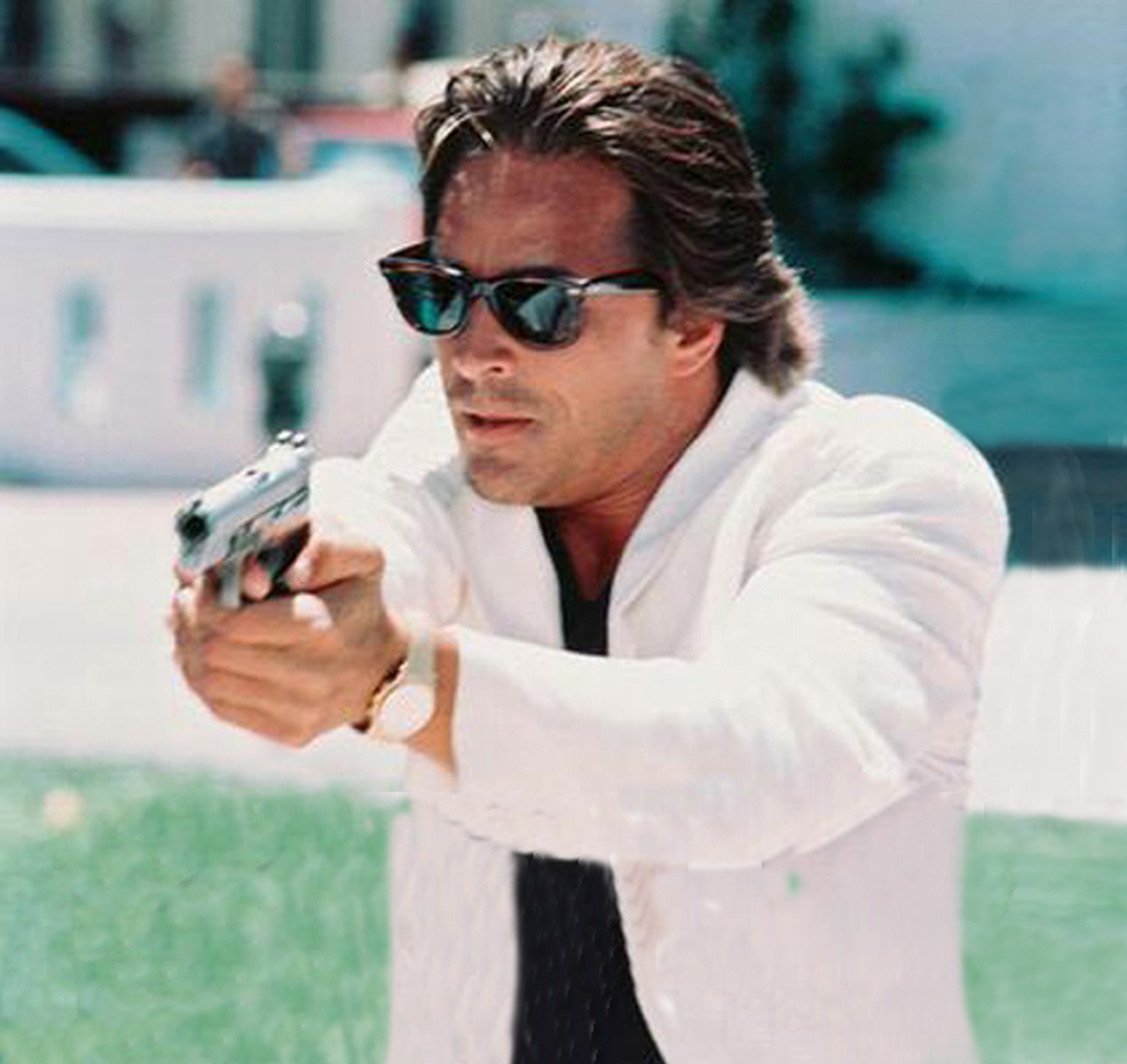 “Miami Vice” — The trend-setting television show is often credited with helping Miami pull itself out of a 1970s malaise, fueling its well-financed race through the 1980s, and, as if on a cocaine high, pushed into the 1990s, and what became a full-blown revival.

[Sept. 28, 1984] — After the introducing credits, the first image seen by a viewer of the Miami Vice pilot was the Carlyle Hotel‘s neon sign, panning down to Don Johnson as Sonny Crockett, smoking a cigarette, and being annoyed by a group of break-dancing B-Boys, accompanied by a noticeably loud, ’80s-ready boom box.
“The Birdcage” 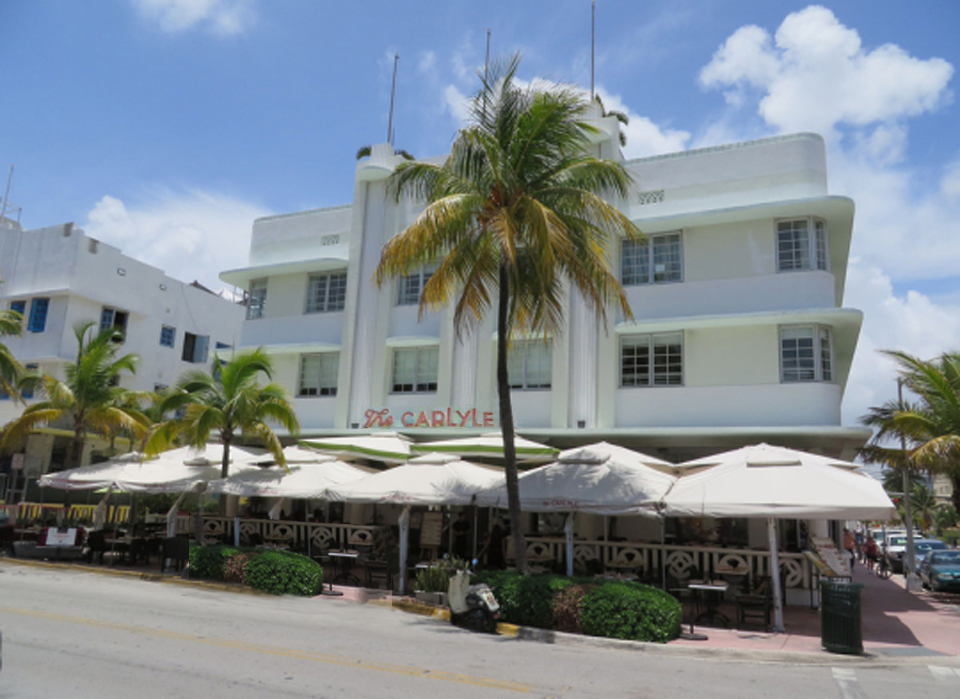 we are fam-il-y
“The Birdcage”/ Official Trailer

cocaine city
(November 23, 1981) — Time Magazine describing Miami as a city awash in cocaine, and noting its ranking as “The Murder Capital of the World,” was the biggest blow to South Florida’s most important tourism industry.

• “Cocaine Cowboys” is a (2006) documentary film, telling the story of a city addicted to, and nearly destroyed by, the Colombian white powder and the shooting war between the Colombian and Cuban gangs fighting for control of Miami.

This is the real-life story that inspired “Miami Vice” and “Scarface.” 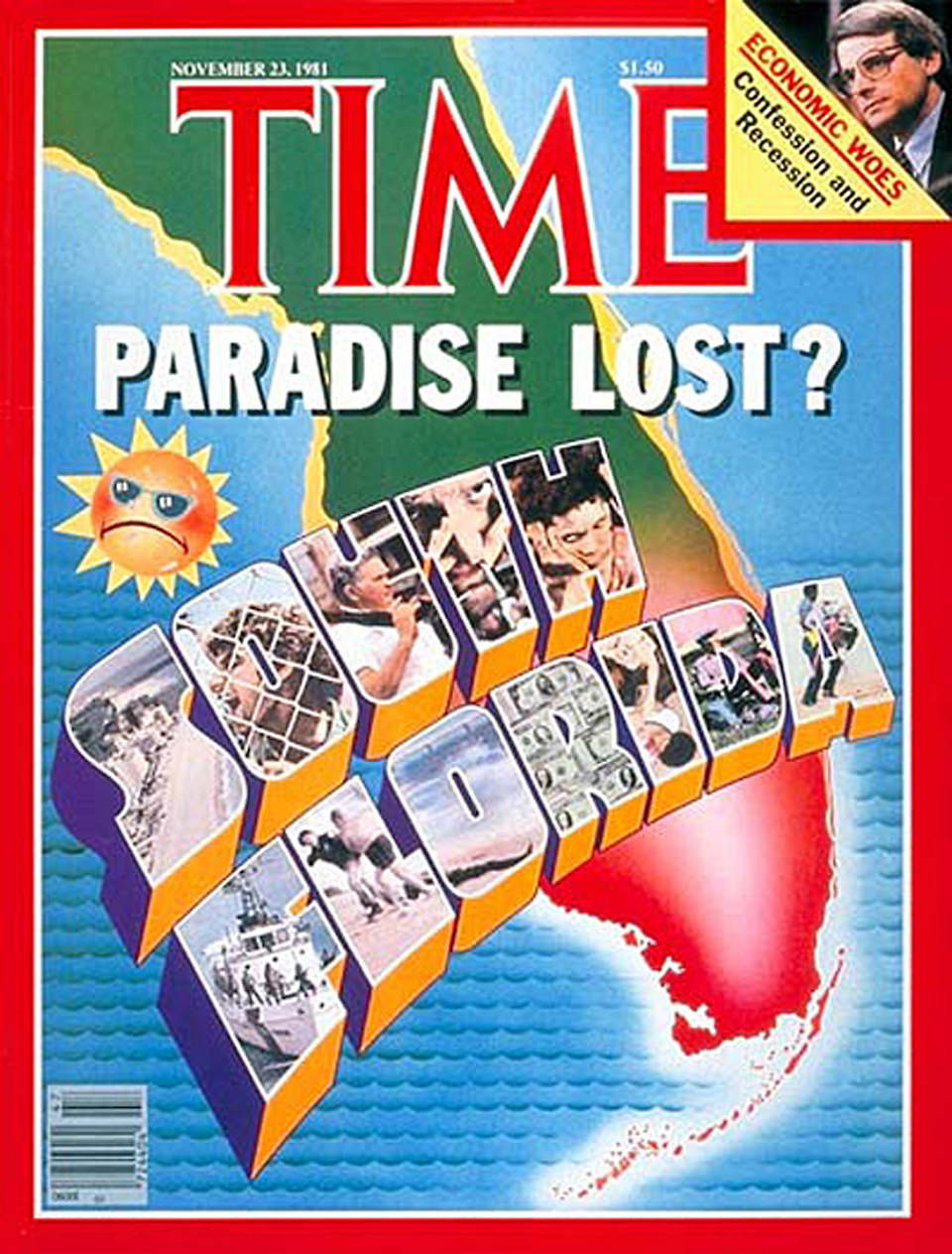 by DAVE BARRY
(Miami Herald)
I came to Miami in the early ’80s, when the Cocaine Cowboy era was still going strong and Miami’s image — not without reason — was horrible. Time magazine had published its now-famous cover story Paradise Lost, encapsulated by this cheerful sentence: “An epidemic of violent crime, a plague of illicit drugs and a tidal wave of refugees have slammed into South Florida with the destructive power of a hurricane.”
Which was, more or less, true. The bad publicity took its toll: Tourism suffered because people were afraid to visit Miami. I wrote an essay about this for the Herald’s Sunday magazine, Tropic. To promote it, we gave out bumper stickers that said “Come Back To Miami“
Readers loved those bumper stickers. But not everybody down here thought it was funny. Miami’s civic leaders — the politicians, the tourism people, the Chamber of Commerce — hated the jokes and the bad publicity. They were openly jealous of Orlando, with its Mouse-tastic attractions and safe, antiseptic, family-friendly image. Our leaders wanted Miami to be more like that. But Miami wasn’t Orlando, not even close. Bad things kept happening down here.
Then, in 1984, Miami Vice happened. Theoretically, this should have been our civic leaders’ worst nightmare: People were avoiding Miami because they thought it was infested with violent drug criminals, and then along came a hugely popular TV show that presented Miami as a place that was … infested with violent drug criminals!
But here’s the thing: Miami Vice made Miami look cool. Yes, many drug busts went down on the show, and many fatal shots were fired. But they were fired by Don Johnson and Philip Michael Thomas! Who were hot! And who wore designer jackets! Over pastel designer T-shirts! And designer linen pants! And designer Italian loafers WITHOUT SOCKS!
The premise was ridiculous, of course — “undercover” Miami police officers Sonny Crockett and Rico Tubbs, looking nothing like any undercover police officers anywhere ever, driving around in flashy, insanely expensive cars and boats, emitting melodramatic dialogue and inevitably ending each episode taking down a drug kingpin — in Miami Vice, three out of every four Miami residents were drug kingpins — in a hail of bullets, accompanied by a hip (for the ’80s) music soundtrack.
And guess what? Everybody loved it. Including Miami. Especially Miami. For one thing, the city looked pretty good, in a seedy, tropical, lush, degenerate, Eurotrash supermodel way. It looked cool.
It also looked exciting. Miamians began to see the fact that we weren’t Orlando as a good thing. Orlando was a place where you went to stand in line in the heat with your whining kids for 73 minutes to ride around in spinning teacups for 73 seconds. Miami was a place you went without your kids (maybe even without your spouse) to drink mojitos and smoke cigars (or maybe something else) and stay up all night and have an adventure. If it felt foreign, disorganized, a little out of control, even a little dangerous … hey, that was cool. That was Miami.
At least that was the image. It’s still the essence of our image, 30 years later. Which is why I think Miami owes a debt of gratitude to Miami Vice. There should be a street named after it. And the street signs should be pastel. And somewhere on the street there should be a statue of Rico and Sonny, aiming guns at a kingpin only they can see.
And the Sonny statue should have stubble.
— Dave Barry /Miami Herald Columnist
• BACK TO THE BEGINNING