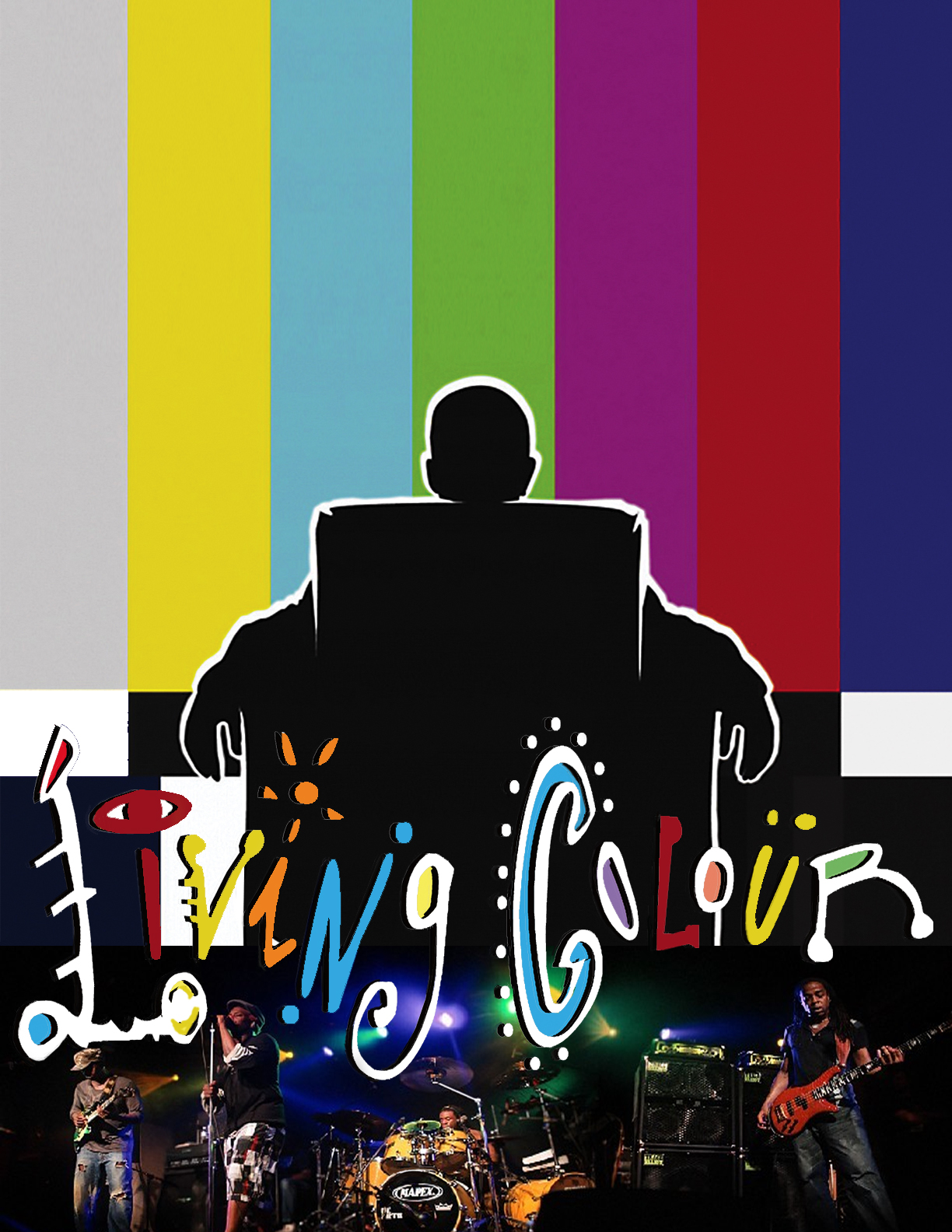 December 27, 2OO1 — Living Colour had been on a 7-year hiatus when it reunited at CBGB, Downtown New York City (December 21, 2000). After 911 interrupted the band’s 2OO1 reunion tour, Living Colour’s future was again in doubt … but everyone happily agreed to continue, finishing the tour as originally scheduled. “Crosstown Traffic” was the encore performance at the Disney House Of Blues (Orlando, Florida).

Vernon Reid — As a member of Ronald Shannon Jackson’s Decoding Society, and playing and recording with DEFUNKT, another Underground NYC favorite, Vernon’s earned an early reputation as a  young, hot-shit guitar player in the Avant-Funk/Outside Jazz [DOWNTOWN NYC] scene. It was there and then Vernon was inspired to step out on his own and form a number of bands, all of which he called Living Colour.

1985 — Hearing Corey Glover sing “Happy Birthday” at a mutual friend’s birthday party, Vernon asked Corey if he might be interested in joining Living Colour? More an actor, including his part in Oliver Stone’s Platoon, Corey never thought of fronting a Rock ‘N’ Roll band, but he agreed.

Joining Vernon and Corey, were Will Calhoun (drums) and Muzz Skillings (bass), completing the band that went on to tour with the Rolling Stones, and record the award-winning Vivid and Time’s Up.

With help from the Rolling Stones’ Mick Jagger, Living Colour signed with Epic Records and released its debut Vivid (May 3, 1988). The band’s rise in popularity was immediate, as it’s first single “Cult Of Personality” was played regularly in MTV’s primetime rotation, and Vivid climbed to #6 on the U.S. Billboard chart. Then, an appearance on NBC’s Saturday Night Live (April 1, 1989) was another high-profile opportunity for Living Colour to show off its psychedelic, day-glo, hard funk, metal attack.

December 14, 1989 — Vernon Reid, wearing a “Burn Baby Burn” (American Flag) T-shirt, and the rest of Living Colour, after nearly a year on the road, joined the Rolling Stones onstage in Montreal, at Olympic Stadium, for an end-of-tour [Steel Wheels] “It’s Only Rock N Roll” jam.

Later that year, Living Colour was asked to open for the Rolling Stones on its Steel Wheels World Tour, for which the band received critical acclaim and enhanced it’s reputation notably. Also in 1989, Living Colour was named “Best New Artist” at the MTV Video Music Awards, and “Cult Of Personality” won a Grammy Award for “Best Hard Rock Performance.” 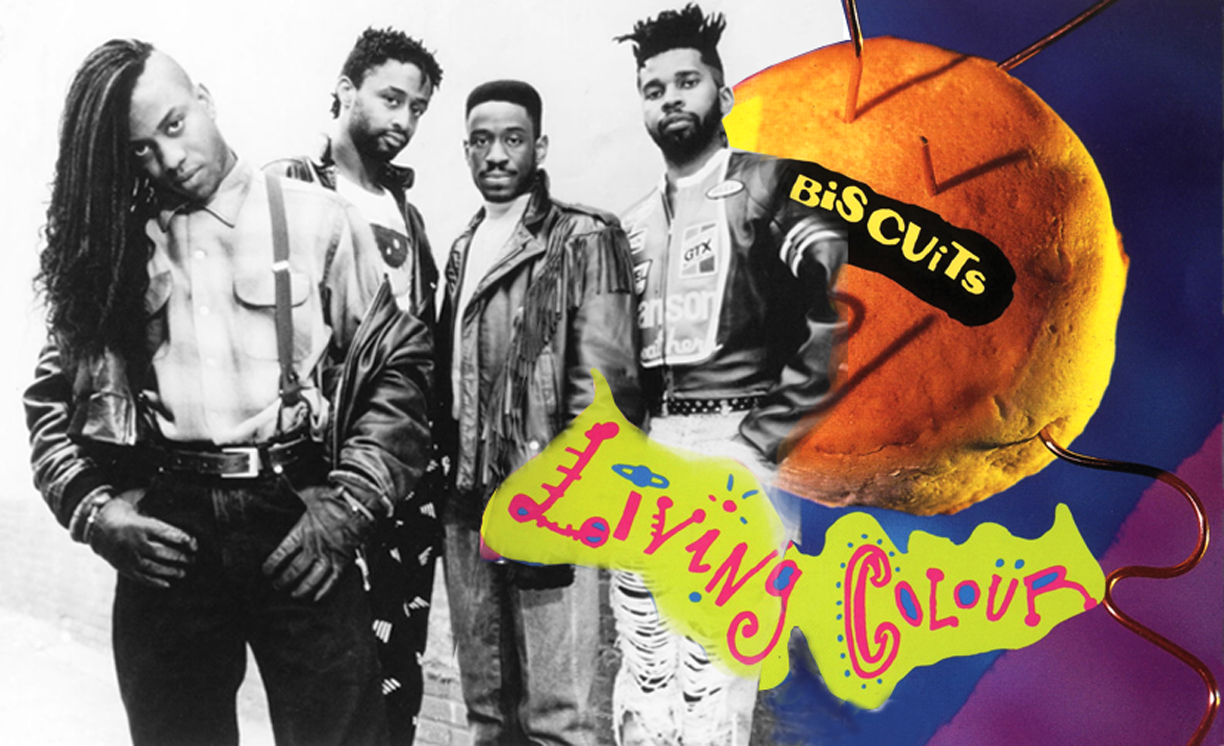 An excerpt out of Time Tunnel, an out-of-print Living Colour documentary, including performance clips and interviews with Vernon Reid, Corey Glover, Will Calhoun, and Muzz Skillings, telling the story of the band from its inception, to the success of Vivid, touring with the Rolling Stones, and starting work on Time’s Up.

1993 — After completing the South American leg of Living Colour’s 1991 world tour, bassist Doug Wimbish accepted the band’s invitation to join the band permanently.
Doug’s contribution, as a writer, player, and producer, are significant in what critics called the “darker” tone of Living Colour’s third album, Stain.

Because Stain came at a time (March 2, 1993) when Seattle, Nirvana, Pearl Jam, and a new genre called “Grunge” were commanding most popular attention, it was overlooked compared to Living Colour’s first two albums, Vivid and Time’s Up. Despite praise from critics and fans, both who appreciated the record’s harder, industrial edge, Stain reached only #26 on the Billboard chart, and because a guy named Jon Stainbrook with a band called The Stain filed a lawsuit and had production of Stain stopped. The record remained out of print until 2013, when it was released on disc, and made available to download.

1993 — While working on a record to follow Stain, a disappointed Reid decided Living Colour should take a break.

In the meantime, Living Colour’s 1993 looked, on television, like things couldn’t be better. They had already written and recorded a number tunes for a new record, won another Grammy Award for a cover of “Crosstown Traffic” on Stone Free, a Jimi Hendrix tribute record, contributed to two high-profile soundtracks, recording “Sunshine of Your Love” for James Cameron’s True Lies, and write and record “Me, Myself, and My Microphone” with RUN-DMC for Judgement Day.

It was something of an illusion, all the accolades were for efforts already made, Vernon, at that moment, was looking for something different. After he officially ended Living Colour’s decade-long run, he immediately went on to work on a number of solo projects, including a multi-tune collaboration with Public Enemy.

After two Grammy Award-winning efforts in Vivid and Time’s Up, Stain receiving wide-spread critical acclaim, and the production of “No/ Dread,” a fine document of Living Colour performances (electric and unplugged) with Wimbish a permanent member of the band, Vernon was still disappointed in Stain, and decided to call it quits in 1995, immediately after finishing a tour with the D.C. punk band, Bad Brains. 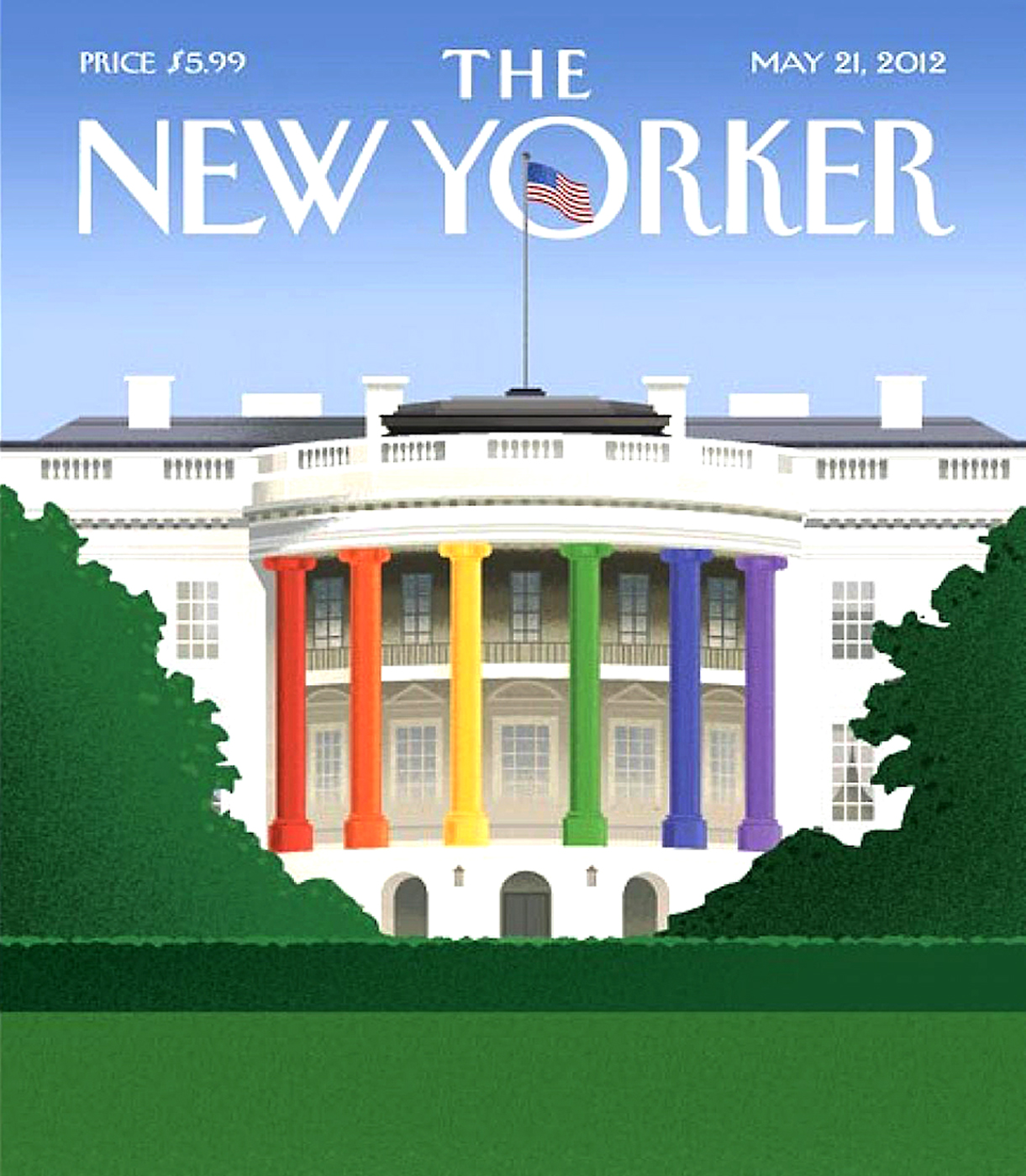 After Living Colour’s dissolution, each member went on to work on solo projects, reunite with old bandmates, and join other bands, both in the studio and on the road.