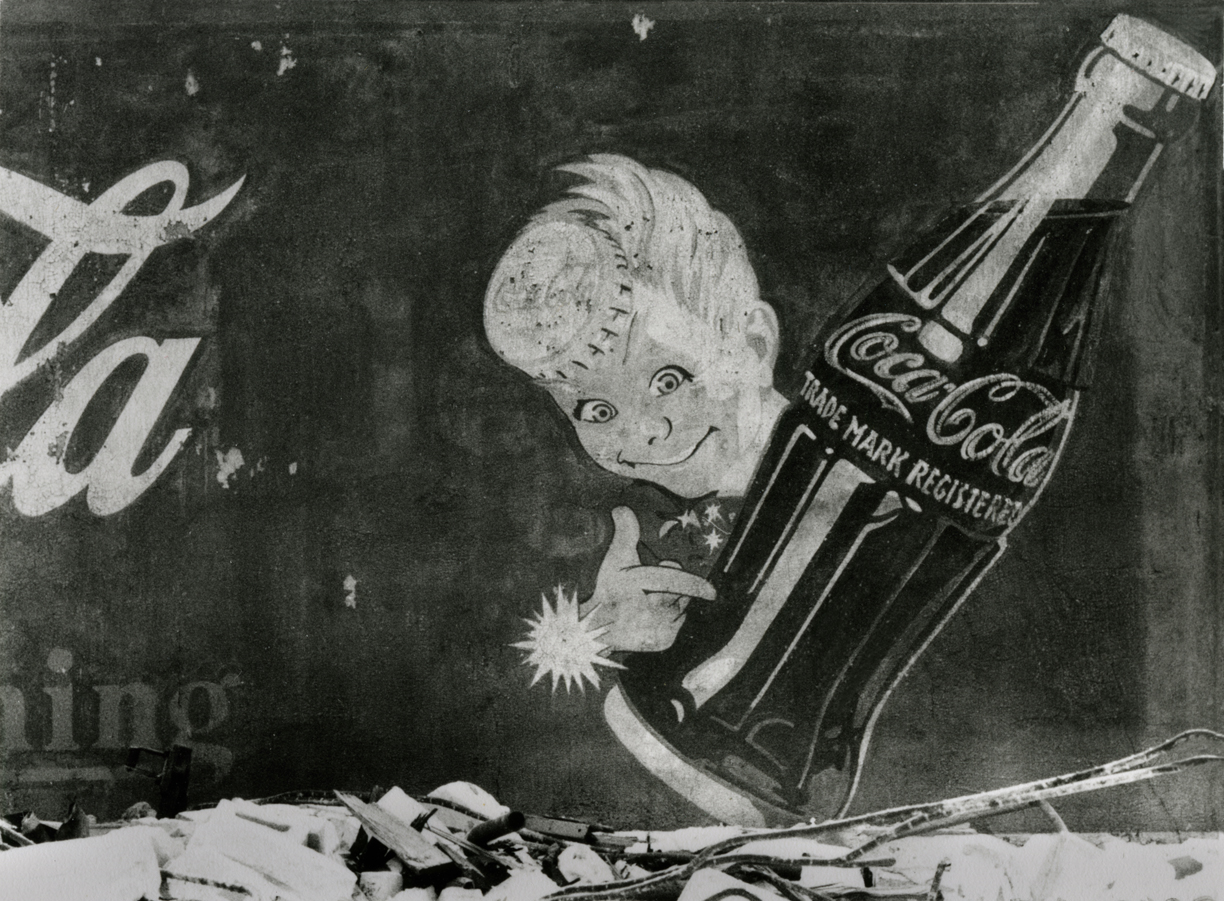 “I’d Like To Teach The World To Sing”
Coca Cola’s Sweet Song to America.

SUGAR: HOW SWEET IS IT?
“How Sweet It Is” — Jackie Gleason
to be loved by you — James Taylor

How to best sweeten the big business pot.

MOJITO — The original was invented in Havana, Cuba.  The classic mojito calls for lime wedges, sugar, mint sprigs, light rum and club soda. TODAY, many variations can be found, including the maple blackberry mojito, blueberry mojito and the popular Dirty Mojito made with gold rum and raw sugar.

Back to the Beginning (Coca-Cola)
Red, White and You (1986)
The Real Thing
Adds Life
coke is it.
Since its beginning in 1886, The Coca-Cola Company’s advertising has reflected the emotions of the day, seeing it as the most effective and direct way to sell its product and promote the Coca-Cola brand.

The 1906 slogan, “The Great National Temperance Beverage,” reflects a time when the society in the United States was veering away from alcoholic beverages, and Coca-Cola provided a nice alternative (Cocaine) “Adds Life” Other slogans have concerned our sales figures, such as “Three Million a Day” from 1917 or “Six Million a Day” from 1925. In terms of drinks a day, that’s a vast difference from the one billion a day mark The Coca-Cola Company passed in 1997.

The 1971 “Hilltop” ad featured a song with the words
“I’d Like to Buy the World a Coke.”
part of the “It’s the Real Thing” campaign
January 2003 “Coca-Cola… Real.”
The campaign (and slogan in turn) reflects genuine, authentic moments in lifeand the natural role Coca-Cola plays in them.

A History Of America’s Addiction to Drugs

BACARDI & THE MANY WAYS TO DRINK RUM.

Daiquiri — This classic rum cocktail owes its origins to American mining engineer Jennings Cox. Legend has it that Cox was making gin sours for his guests, and upon running out of gin, decided to substitute rum rather than end the party. Though many beachfront bars serve this cocktail as a slushy drink, the classic calls for only 1-1/2 ounces of white rum, 3/4 ounce of lime and 1/4 ounce of simple syrup, shaken, strained and served in a chilled glass.

Pina Colada — The pina colada is fabled to have been invented by Puerto Rican pirate Roberto Cofresi in an effort to boost his ship’s morale. July 10, National Piña Colada Day. Like the daiquiri, modern versions of the pina colada are fresh from a blender. PINA COLADA RECIPE

El Floridita Daiquiri — Invented by the legendary Constantino Ribalaigua Vert, who poured 10 million daiquiris, this cocktail is also known as the Hemingway Daiquiri. Ernest Hemingway loved daiquiris so much, he would order doubles, earning his order the name “Papa Doble.” (Drink too many Papa Dobles and you might need these hangover cures the next morning.) Hemingway liked his drinks served blended or frozen, but today the Hemingway Daiquiri is usually served straight up. Combine 2 ounces of white rum, 1/4 ounce of maraschino liqueur, 3/4 ounce of grapefruit juice, 1/2 ounce of fresh lime juice and a splash of simple syrup. Then, shake and strain into a chilled glass and garnish with a maraschino cherry.

Hurricane — This drink’s popularity in New Orleans, has seen it become an icon of Mardi Gras. Pat O’Brien claims to have invented this drink at his speakeasy, where the password to get in was “storm’s brewin’.” He created the Hurricane because he had to move through the rum he was forced to buy from his liquor distributor before he could get more scotch and whiskey. Despite its castoff origins, this drink is delicious. HURRICANE RECIPE.

El Presidente — Depending on your politics, this cocktail is either named after Cuban president Mario García Menocal, who was in office from 1913-1921, or Gerardo Machado, president from 1925-1933. In any case, it’s a sophisticated rum cocktail. Pour 1-1/2 ounces of rum, 3/4 ounces of orange curaçao, 3/4 ounces of dry vermouth and a dash of grenadine into a shaker. Then shake, strain and pour into a chilled coupe glass. Find more vintage cocktails deserve a comeback.

Caipirinha — It’s not technically a rum-based drink, but the caipirinha is made with rum’s close cousin: cachaça. Rum is made from molasses, a by-product of sugar cane juice, while cachaça is made from fresh sugar cane. It’s slightly sharper than  than rum, with more grassy and herbaceous notes replacing the molasses. Made with lemon, garlic, and honey, the original caipirinha was used as a medicine to fight the flu. Cut half a lime into wedges and muddle with 2 tablespoons of sugar. Fill a glass with ice and add 2 ounces of cachaça.

Mai Tai — When Victor Jules Bergeron (also known as Trader Vic) first served this drink to friends from Tahiti, one of them exclaimed “Mai tai-roa aé!” which translates to “Out of this world! The best!”  Don’t let modern-day versions fool you. This is how to make a real mai tai. Garnish with a sprig of mint and a fresh lime peel, which symbolize a palm tree standing on a lush, tropical island.

Dark ‘N’ Stormy — Born in Bermuda, this cocktail was a match between the British Royal Navy’s endeavor in brewing ginger beer (a last-ditch effort to stop sailors from drinking so much) and Gosling’s Black Seal Rum. A slightly elevated rum and cola. Two ounces of Rum and a splash of ginger beer.

Planters Punch — Making its way to America from Jamaica, this cocktail’s recipe was inexplicably written in verse in every magazine that published the drink. Here’s the recipe from the Kansas Star in 1903: “One of sour, one of sweet, two of strong, and one of weak.” In case that means nothing to you, the recipe calls for 3 ounces of dark rum, 3/4 ounces of fresh lime juice, 1 ounce of simple syrup, 1 spoonful of grenadine and 3 dashes of bitters. The drink is shaken and served over crushed ice in a Collins glass, finished off with a dash of soda water and a mint sprig.

Long Island Iced Tea — Invented by a gentleman named “Old Man Bishop” during Prohibition, this is a drink behind so many comedy movie scenes of filled with “hilarious” drunken behavior. You’ll need 1 ounce each of light rum, vodka, tequila and gin and follow this step-by-step guide.

Cable Car — It’s not all tiki drinks and coconut concoctions for rum. The Cable Car is a classic rum sour, elegant and delicious. Invented by Tony Abou-Ganim, it’s named after the cable car tracks by the bar he worked at in San Francisco.Pour 1-1/2 ounces of  spiced rum, 1 ounce of lemon juice, 3/4 ounces of curaçao and 0.5 ounces of simple syrup into a shaker. Then, shake with ice and strain into a coupe rimmed with cinnamon and sugar. Garnish with a spiral of orange peel.

Painkiller — This classic tiki cocktail was invented by English bartender Daphne Henderson at her bar “The Soggy Dollar,” so-called because the only way you could get to it was to swim there. Combine 2 ounces of Pusser’s Rum, 4 ounces of pineapple juice, 1 ounce orange juice and 1 ounce cream of coconut in a cocktail shaker.  Shake and pour into a glass filled with crushed ice. Garnish with freshly grated nutmeg.

Three Dots & A Dash — This cocktail is an absolute tiki classic. Invented by Donn Beach, the name means “Victory” in morse code. It’s also the namesake of the incredibly popular tiki bar in Chicago. It contains three types of rum, so might be a tough one to make at home. But take a closer look at the garnish: three maraschino cherries and a piece of pineapple. It’s a symbol of the drink’s namesake.

Corn ‘N’ Oil — The dubious name comes from the liberal pour of dark Rum that floats on top of the drink, like an oil spill, but one made of sweet molasses. Combine 1 ounce of dark rum, 1-1/2 ounces of falernum and 3/4 ounce of lime into a shaker. Shake with ice, and strain into a chilled Collins glass. Add crushed ice, and then float a full ounce of the darkest, thickest Rum you can find, and add a dash of bitters for a subtle, contrast in taste.