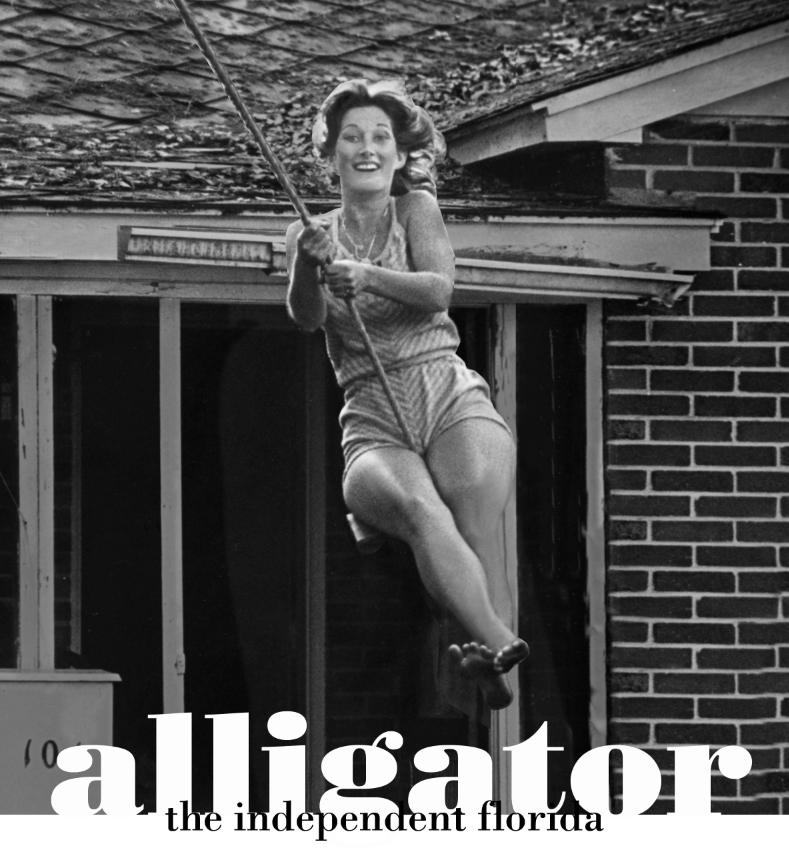 University Of Florida
INDEPENDENT FLORIDA ALLIGATOR
“The Greeks Don’t Want No Freaks”
BLUE KEY
Student Government
GATOR FOOTBALL
Bull Gators
Charlie Pell Bear Bryant picture (Kevin Kocznski)
I Was An Independent Gator Tutor (w/Benefits)
Robin Fischer
Johnny Gaffney
Onward Right-Wing Christian Soldiers
Steve Spurrier #7
Danny Wuerffel
Tim Tebow
Urban Meyer (THE $8-MILLION MAN)
First Day — Saturday U-Haul Arrival
Cheryl follows in my black VW
University Avenue (empty)
Game across the road at Florida Field
Walked over and around
Oak Trees, Moss, Old-School, a windowless press box, with typewriters, and a KFC box of chicken for lunch (halftime)P
8-FT High (small) brick wall. Looking through a gate
A steep look down (100 feet) onto the field.
Big Gator painted on the grass in the center
50-yard line
Wooden Bleachers and a stand of 50-yr-old, tall, thin Pine Trees.
(South End Photographs)
As Cheryl and I walked, we heard a roar erupt as if out of a volcano …
The gators had scored.
Early in the first quarter, first in the game against (?), but also the first of Charlie Pell’s first year coaching the University of Florida Gators, the “PRIDE” of GAINESVILLE.
Lunch at the Old College Inn
Interrupted by activity.
The game had ended and now the avenue was filling with Gator fans, looking for somewhere to quench their post-victory thirst.
Did I say “victory?” We were surprised to hear, that after the volcanic roar, came three, slow-moving quarters of football, in which (?) managed to score in the third quarter, after which the game ended in a tie.
That’s why the crowd entering the Old College Inn, was hardly jubilent, but not absolutely crushed either.
A profound disappointment that the first game of the “school” year had ended in a tie.
Little did they know that a xx-xx tie with ? would be the highlight of the 1979 season, and the last for Charlie Pell, after his 0-?-1 rookie performance.
MEET FUTCH AT THE ALLIGATOR
NEXT TO THE CHURCH
HALL WITH OLD COLLEGE INN REFRIGERATOR DOORS
ALLIGATOR BUMPER STICKER on the first (wooden) door on the left.
Dave Futch — Tennis — First Roommate — Country Club restaurant waiter
Bob Bartalotta — Death Trap at the Hippodrome
MARTHA —
Merideth — (Hunter) D.C. Excursion
“Regardies”
Little River Band (on the lawn)
Dormitory (peeing in the sink)
MUCOZO
ORTIZ
BUCKMAN HALL — The building was named for Henry Buckman, the legislator who authorized the higher education consolidation bill, known as the Buckman Act, which established the University of Florida in Gainesville. Buckman and Thomas Hall were the original University of Florida buildings.
Plaza Of The Americas
(Jed Smock & Cindy Lassiter)
(The site of “The Ball That Broke The Ball’s Back”

(Interracial couple)
Krishna Raisin Bread and Rice
CENTURY TOWER
UNIVERSITY AVE.
HYDE & ZEKE’S
TENNIS COURTS / Racquet Ball / Homeless Alligator reporter (?) sleeping, using the old Florida Gym bathroom/facilities
Old Basketball Gym — Pat Benatar, Frank Zappa, Steve Landesburg “Taxi” to one side.
O’Dome Built — Inflatable, like the Bud Cans
The Cars
Elvis Costello — St. Petersburg pianist. After one and a half hours, he came back out and asked if the crowd wanted another? We stayed for every second of an encore that was longer than the show.
Al Di Meola (on the other hand) left as he opened the acoustic set.
THE BROWN HOUSE — Marty Liquori (UF Olympian) owned it.
THE GAINESVILLE 8 — Scott Camil (Anti-Vietnam Activist) had lived in the house next door.
“Oh Camil!” (The Winter Soldier) b/ Graham Nash
Father Gannon (?)
GAINESVILLE GREEN
Allman Brothers
Steve Z — Homegrown Botanist
Cross pollinated Afghanistan and Columbian and whatever.
It was bright green, sticky as pine sap, and the sweet smell of well cared for Sensimilla.
Robin Williams at Gator Growl.
“I’d like to fertilize her buds.”

MONDAY, AFTER SATURDAY’S TIE
Gathered in the narrow office where I had met Futch.
Now, seeming even smaller, with the space being filled with near thirty people, Futch being the only one I had met.
What I was a part of was a semester-ending ritual at
THE INDEPENDENT FLORIDA ALLIGATOR
The passing of the editor’s torch.
On this day, Barry Klein was handing off to Robert McClure
Barry — buying Steve Z’s weed
Robert — filing an eddy in the Reitz Union fountain
Tearing the gate of the Brown House’s fence.
KEVIN TURLEY — Pharmacy Student, Alligator writer, and part-time Alligator janitor, for the $75 per week.
Barry’s routine, dropping a bagel and cream cheese on his desk, before heading upstairs for his every morning facilitation.
Turley was an old friend of Klein’s since they had grown up and gone to school together in St. Petersburg. (Home of the Times)
Made a toilet roll out of Barry’s editorials he had taped together.
RUSH WEEK EAVESDROPPING — Turley, David Dahl
(Sorority Girls of a different color) REJECTED picture
SURF MOVIES (sheets hanging on clothes line)
Sorority Row house
Satellite Beach Boys
Buster
Pancho
Dexter
(Political)
’79 — Jimmy Carter
’80 — Ronald Reagan
(Wrapped in American Flag @ DC Capitol) b/ Sandy Felsenthal
JOHNNY HINES (picture taken with Sandy’s camera, getting a ride home in his car, but with his roommate, Sally, driving.

GATOR FOOTBALL — Right-Wing Christian Soldiers
GAINESVILLE GREEN
“Greeks Don’t Want No Freaks” — The Eagles (“GATOR!” Frat Parties to Florida Field)
TOM PETTY HOMECOMING ’80
Rodney Dangerfield /
Bob Hope w/Irene Cara “FLASHDANCE”
Field Sketch (Guns) “Eat Lead Gator Bait”
Parking cop
Tigert Hall secretary
Independent Florida Alligator
B-O-B-H-O-P-E Big letters spotlit, one by one, and the a loud EAT LEAD.
Robin Williams playing some jokes directly to either the student or visitor/parents side of Florida Field
As a marijuana plant, eye a separated female (sensimillia) plant
“You know I’d like to fertilize her buds.”
EAGLES 1980 TOUR — Same Florida Field
Allman Brothers
Steve Z — Homegrown Botanist / The Secret Garden
Dave Futch — Guns (felling pine trees with a machine gun lead)
Harry Crews — “Feast Of Snakes” (Dave Futch profile)
When working at the Herald (’86) a reporter came to ask if I knew a David Futch, thinking that I did.
Dave’s name was on a list of a number of Southwest Florida residents who were arrested as part of a marijuana smuggling ring.
Since leaving Gainesville, Dave had been a fishing guide off Naples/Sanibel Island.
Vinnie Kuntz — Arrested when a joint was found in his cigarette pack, as he entered the auditorium for Dire Straits.
Different than our going over to the Tangerine Bowl
Turley and the (….Brothers?), one passed out
Police ask “Is your friend alright?”
“He’s had a little too much to drink, but he’ll be okay.
Sent on our way, and realize a bag of reefer had been sticking out of my shirt pocket.
Jerry Ulesman — print found with tire track across it, in a garage underneath a recently rented garage apartment above. Cleaned, and always hanged in the main room.
Windjammer Bar (writers)
Old College Inn
Skydiving with Alex and Rocky (Bob Block)
“The Nude Bomb”
Friday (Happy Hour) pitchers of Zombies
Brownies In the Oven
MAYPORT JAZZ FESTIVAL

The Halloween Ball (inc./ The Ball That Broke The Ball’s Back)

JOHN LENNON — walked into the house, Dave Futch and Bob Bartalotta sitting in the dark, listening to “Double Fantasy” on cable radio. The smoke, the lounging, and the listening were nothing out of the ordinary, but maybe a little on a tuesday morning. They broke out of their trance long enough to tell me John Lennon had been killed last night, and they hadn’t moved, and just continued to listen to cable radio’s report and tribute.
This coming at the end of an eventful 1980 in Gainesville, Florida at The University of Florida in Gainesville.

November 4: Reagan defeats Carter in a landslide
November 4 – 1980 United States presidential election: Republican challenger and former Governor Ronald Reagan of California defeats incumbent Democratic President Jimmy Carter, exactly one year after the beginning of the Iran hostage crisis.
November 8 – The 7.3 Mw Eureka earthquake shook the North Coast of California with a maximum Mercalli intensity of VII (Very strong), causing six injuries and $2–2.75 million in losses.
November 10 – November 12 – Voyager program: The NASA space probe Voyager I makes its closest approach to Saturn, when it flies within 77,000 miles of the planet’s cloud-tops and sends the first high resolution images of the world back to scientists on Earth.
November 20 – A Texaco oil rig breaks through to a mine under Lake Peigneur.
November 21
Millions of viewers tune into the U.S. soap opera Dallas to learn who shot lead character J. R. Ewing. The “Who shot J. R.?” event is a national obsession.
MGM Grand fire: A fire at the MGM Grand Hotel and Casino on the Las Vegas Strip kills 85 people.
December

AMERICAN POP
ROCKY HORROR
FAST TIMES AT RIDGEMONT HIGHT
HEAVY METAL
FLASH GORDON
ANIMAL HOUSE
PAT BENATAR @ FLORIDA GYM
FRANK ZAPPA
AL DI MEOLA
FM 1979
• CONVENIENCE IS IN THE EYE OF THE BEHOLDER
When I saw blood running down my arm and dripping off my elbow, I thought he had shot me in the heart.

Steve Forbert / Gainesville, Florida (1980)
“You Can Not Win, If You Do Not Play.”
The importance of voting … forty years later.