POSITIVE ARMY  — By way of Cameroon and Paris, Armand Sabal-lecco landed in Los Angeles, with a mission to bring his African rhythms to America. 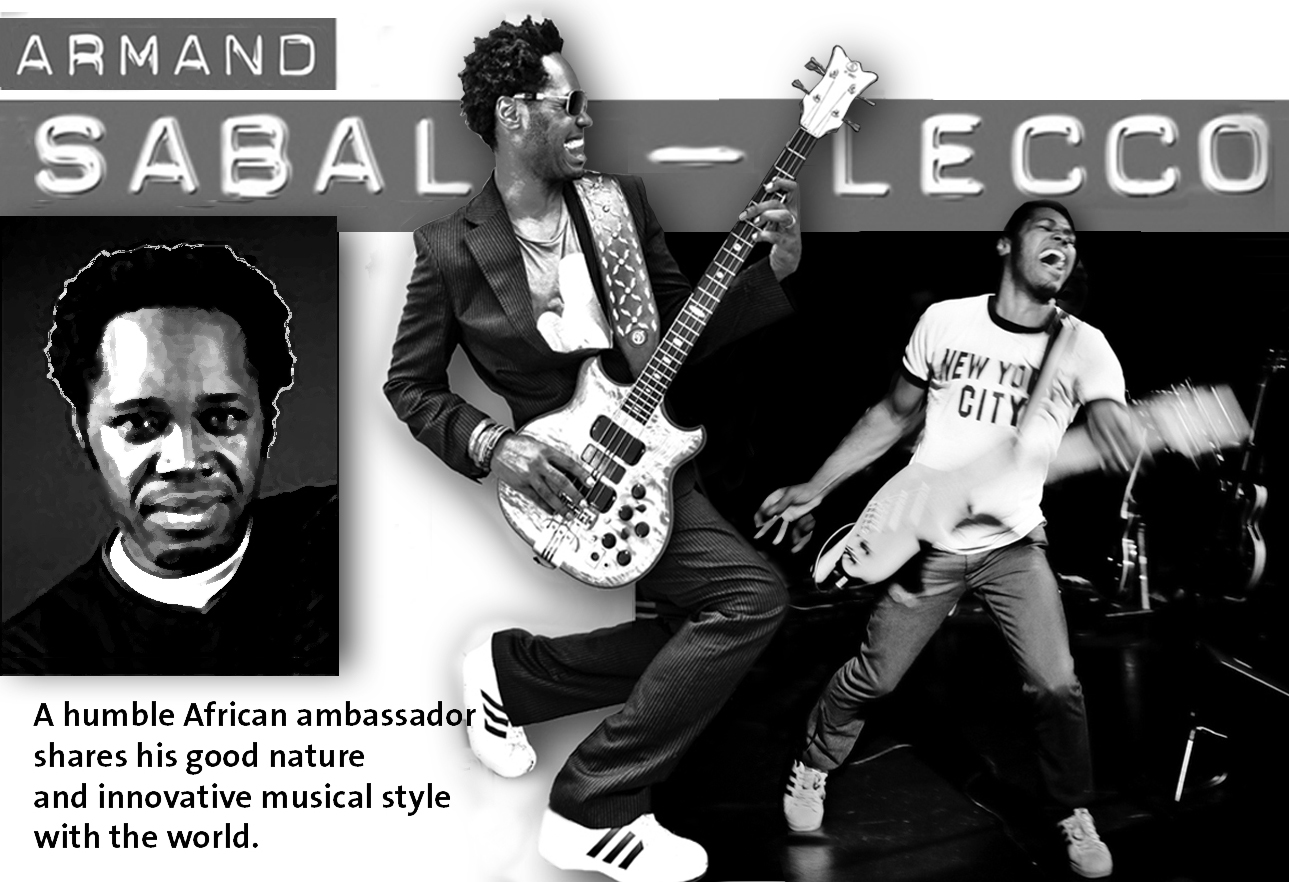 THE REST OF THE WORLD

Armand co-produced, and played on the soundtrack of the documentary film about the life and musical times of Jaco Pastorius, the native Floridian electric bassist who changed the world’s understanding of the usually supportive instrument. Jaco brought it to the fore, and into the outer limits of the harmonic stratosphere.

Armand Sabal-Lecco, co-producer with Robert Trujillo (Metallica), talks about his knowing, and collaborating with, Jaco Pastorius.

Armand wrote “Fulani,” a song on Stanley Clarke’s 2011 Grammy Jazz Album of the Year. He has also received recognition from the National Academy of Recording Arts and Sciences (NARAS) for his work with The Brecker Brothers on their Grammy Award-winning albums, Out of the Loop and “Return of…” and “Rhythm of the Saints,” and Alejandro Sanz’s “Unplugged.” Armand also contributes (as a vocalist) in both feature films (“Blood Diamonds”) and advertising campaigns for international brands.

The 28-year-old bassist and composer from Cameroon, has performed and recorded with Paul Simon, the Brecker Brothers, Herbie Hancock, Stanley Clarke, John Patitucci, Vanessa Williams and many others.

All this was never supposed to happen.

His father, Felix Sabal-Lecco, was once vice president of the Republic of Cameroon, on the western coast of Africa, and later its ambassador to France and Italy. He hoped his son would follow in his footsteps. “I was supposed to be a lawyer, a politician,” Sabal-Lecco said.

But like his brothers Felix, a drummer, and Roger, a bassist, Sabal-Lecco was driven toward music and, at 13, switched from drums to bass. He also acted the madcap on skateboards all around Yaounde, the nation’s capital.

But this was not the proper attitude for a diplomat’s son, and he was sent to live with a sister in Paris when he was 15.

“My father felt that I had to leave, go where nobody would know me,” he said with a laugh.

Since then, Sabal-Lecco has thrived, becoming one of the music world’s most in-demand bassists. He plays Saturday at La Ve Lee in Studio City.

Many people wrongly assume, Sabal-Lecco says, that he plays only African music.

“I’m a guy who lives iA., who lived in France, who lived in Rome, who’s from Cameroon, and who grew up playing funk, rock and straight-ahead jazz,” said Sabal-Lecco, a tall, striking-looking man with a quick, winning smile.

“I started playing African music only after I moved to Paris. In Africa then, it wasn’t hip to play African music. So my music is a mix of all those different things.”

There’s definitely a jazz core to the music that Sabal-Lecco plays at La Ve Lee, where his band includes such upper-echelon L. A. jazz journeymen as David Goldblatt on keyboards and Steve Tavaglione on saxes and electronic wind instrument.

The tunes, open and loose, are melodically diverse, variously underpinned by popping back beats and more fluid, African-based rhythmic patterns that allow plenty of room for soloing.

Sabal-Lecco, who avoids affixing labels to his music, calls this stuff “Leccology.”

“Our band likes to play with the songs like Miles used to do at the beginning of the ‘80s,” he said. “We have the frame, the shape of the song, but we play with it. It seems like we’re as relaxed as in a jam, but everything is pretty set and written.”

That relaxed attitude typifies Sabal-Lecco’s approach to music in general. “I’m a formally self-taught musician, so how I learned music was from what I was feeling, not from what I was reading,” he said. And those feelings determine the outcome of his performances, he added.

“How I play depends on who’s playing with me, who’s listening, the reaction of the crowd. And I want my band to play that way. Some musicians are so involved in how a tune has been written that there’s no communication within the band on stage, and with the audience. I need musicians who can communicate.”

In Paris in the late ‘80s, Sabal-Lecco had just finished a two-week tour with Xamahal, a band he and his brother Felix led, when destiny, in the form of Paul Simon, called–many, many times.

Sabal-Lecco recalled thinking, “What is this? Maybe it was a friend of mine playing a joke.”

So when Simon’s manager called, asking him to come to New York for a session, he did what any of us would do with what we think is a crank caller–he hung up.

Eventually, Sabal-Lecco called the New York number Simon had left on a message, reached the manager he had hung up on, apologized, and was hired to perform a number of tunes on Simon’s then-upcoming, now classic album “Rhythm of the Saints.”

Since then, Sabal-Lecco’s star has been glowing. He’s toured with Simon and Art Garfunkel. He’s had his tunes recorded by fellow bassists Clarke and Patitucci, with whom he wrote “Another World,” which was nominated for a 1993 contemporary jazz instrumental performance Grammy. All this, and he’s just 28.

“For me, it’s been a blessing to move here and make it,” he said. “For a lot of people, it’s very, very hard. I’m very fortunate.”

Armand Sabal-Lecco is a Cameroonian bass guitarist, composer and multi-instrumentalist best known for playing bass-guitar on

Armand Sabal-Lecco’s father, Félix Sabal Lecco, was a minister in the government of Ahmadou Ahidjo, and was later appointed ambassador to Italy and France.

His father played the guitar as a young man, and two of his brothers are also musicians:

Félix is a drummer

Roger is a bass player.

Armand began playing the guitar when he was six, then took up drumming, and eventually settled on the bass, although he is not limited to that instrument. According to Armand, his older brother Roger would often be late for rehearsals and shows, and Armand began standing in for him as bass player. He decided the bass was more convenient than drums, easier to pack up, so he had more chance of picking up girls before they left after the show.

When he was fifteen, his father sent him to Paris to live with one of his sisters.

In Cameroon, Armand Sabal-Lecco had played funk, rock and straight-ahead jazz. It was only after moving to Europe that he started introducing African elements to his music. In the early 1980s he co-founded the Ogogoro Gang, an Afro Funk band, and began playing clubs on Europe. After a year the group was voted the number one “Jeune espoir francais.” He also developed his skills as a composer during this period.

Armand and his brother Félix formed the African fusion band Xamahal, performing together at the [1986] European Jazz Festival.

Manu Dibango — He toured with this band around the world and played on several of their albums.

Whenever landing in a new country, Armand sought out the local record stores, looking for an area’s favorite indigenous music. Manu Dibango was  a generous bandleader, offering much solo and improvisational time for a number of players, including Armand, in his always large bands.

In 1989 Armand Sabal-Lecco was invited to New York by Paul Simon to play bass on Simon’s eighth studio album, The Rhythm of the Saints, released in 1990. His brother, Félix, plays drums on this album. This was followed by a 14-month world tour. On 15 August 1991 he performed with Paul Simon to an audience of over 750,000 people in New York’s Central Park. In 1993 he was invited to Washington D.C. to play with Paul Simon at President Bill Clinton‘s inauguration festivities.  Sabal-Lecco played on Stanley Clarke‘s 1993 album East River Drive, and often played with Clarke in the years that followed. He became an official member of the Stanley Clarke band in 2002. In 2004 he played at the Bahamas Jazz Festival as a member of this band.

A sample of other artists with whom he has played includes

He composed two songs and co-authored the cover song for John Patitucci‘s 1993 Another World, later nominated for a Grammy Award. As a composer he has written for