• After the abrupt cancellation of his twelfth Late Night w/David Letterman performance, Bill Hicks called his friend, The New Yorker‘s John Lahr (Bert’s son), who after the conversation wrote (“THE GOAT BOY RISES”), a most accurate and entertaining profile of Bill, for the magazine’s November 1, 1993 issue.
. 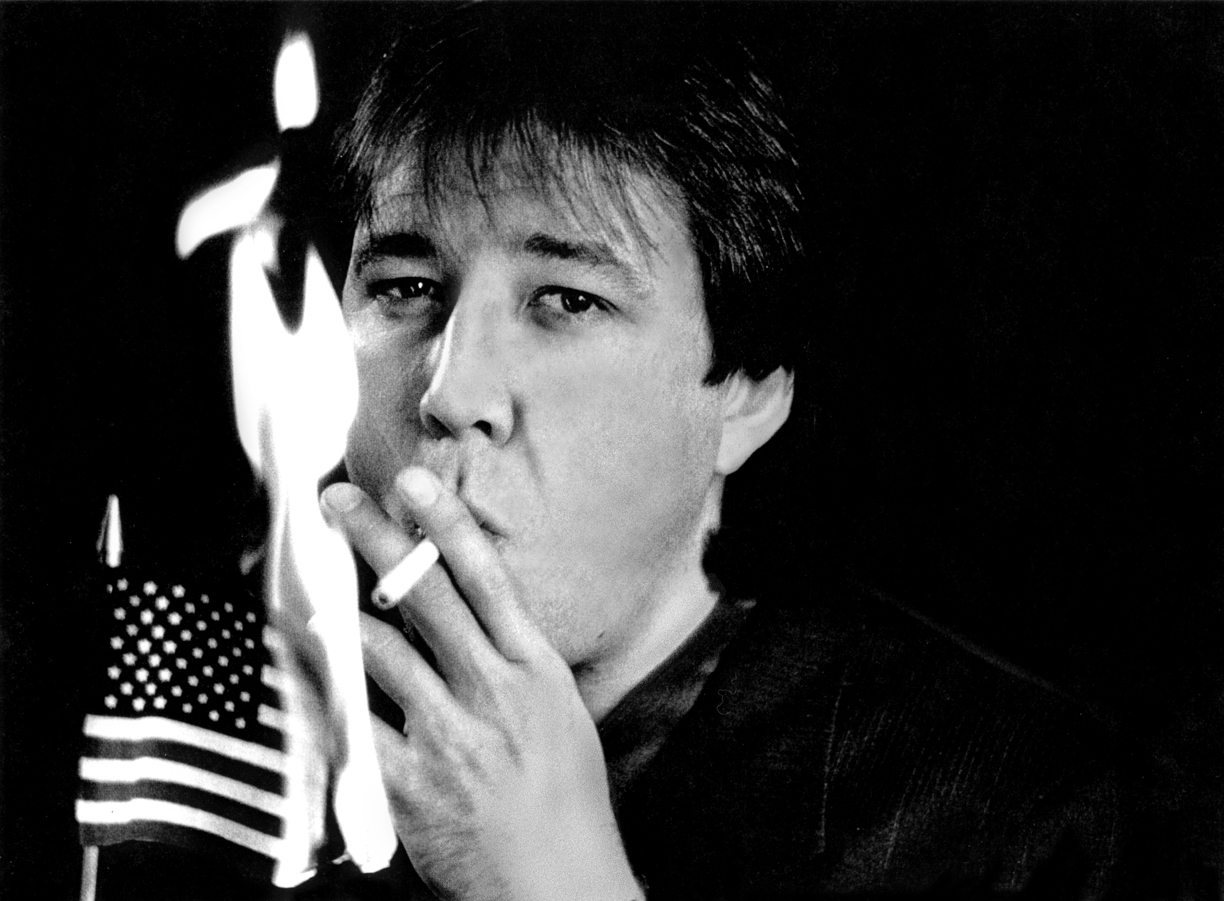 “AS A YOUNG BOY IN AMERICA, I was always told that I could grow up to be anything I wanted to be. I could be a fireman, a policeman, a doctor, and then, for the first time in the history of mankind, something called an astronaut. Shit, I could even be PRESIDENT OF THE UNITED STATES.
“But, like so many kids (especially in Texas), I was brought up on a steady diet of Westerns, and what I always wanted to be was the avenging cowboy hero — that lone voice in the wilderness, fighting corruption and evil wherever I found it … Always standing for FREEDOM, TRUTH, AND JUSTICE.
In my heart of hearts, I still track the remnants of that dream wherever I go … in my endless ride into the setting sun.”

Although delivered to illicit laughter, an honest anger always came through in Bill’s vicious social commentary. “Burning Issue” (listen above) was a response to the right-wing’s ignorant criticism of the United States Supreme Court’s 1989 ruling that the 1st Amendment to the United States Constitution protects every American’s right to (non-violent) “Free Speech,” even when expressed in the desecration of a symbol some find sacred.

The image of Bill lighting a cigarette with a burning American flag was taken in 1989, the same time The Court was making the first of its two decisions on the flag-burning issue.

Inspiration for the portrait came from flag burning and two of Bill’s most popular topics … tobacco and false prophecy.

When asked to stand for the photograph, Bill’s response was immediate and true. “Yes,” he said, quickly adding, “But I’d rather you take a picture of me pulling a knotted flag out of my ass!,” referencing the First Amendment/Pornography debate over photographer Robert Mapplethorpe’s controversial, homoerotic exhibit on display at the National Gallery in Washington D.C. at the same time.

A Day in the Life of Bill
… preparing for a Late Night with David Letterman performance.

In 1991, the CBS News Feature program “48 Hours” followed Bill as he prepared for one of his 12 “Late Night” with David Letterman performances. In it, you see him with “Late Night” producer, Frank (full-of-himself-republican) Gannon, driving from club to club in New York City, working on the five minutes he will do on the show later that week.

In it, you’ll hear Gannon explain how he knows best what will work on Letterman’s show, and then Bill, with the CBS reporter, explaining how full of shit Gannon actually was.

Included, after the “48 Hours” piece, you’ll see the Friday night “Late Night” performance (his eighth) Bill had been preparing for, which includes his piece on America’s still raging GUN LUST.

Two years later, just months before his death, Bill did his twelfth “Late Night,” which was pulled from the broadcast, after David Letterman (agreeing with the CBS “Standards and Practices” department) deemed it too offensive to air. Sixteen years later, Letterman invited Bill’s mother onto the program, publicly apologized for having pulled the set, and broadcast it then, posthumously.

While many (especially right-wing Christians) called Bill “Un-American” for his desecrating the American flag, and for his aggressive delivery of an extreme, Libertarian, and anti-Republican message, the more enlightened knew Bill was a most honest patriot and compassionate American Citizen.

LISTEN TO THIS (If You Dare)
— Bill Hicks (1993) pornographic depiction of Rush Limbaugh,
with Barbara Bush, as you never saw her.

… and then came Trump.

Nearly 30 years later, Donald Trump, in another example of his monumental ignorance, “tweeted” out his belief that anyone daring to burn an American flag should lose their citizenship.

Of course Limbaugh hasn’t changed since Bill’s 1993 description, and today kneels as one of the most notorious Trump-suckers. “Loving Rush” was a bit on Bill’s last recording, Rant in E Minor, released four months before Bill died. It was a sad day for what’s become a languishing progressive movement … a day when the left-wing lost one of it’s most consequential and viciously funny social commentators.

After listening to his opinion of the 1990’s republican hierarchy, and imagine what he’d have to say about today’s Donald Trump, Fox News propaganda, and the alt-right’s favorite sons, Steve Bannon and Breitbart News’ favorite pussy Milo Yiannopoulos.  It would surely be a description far less pretty than Yiannopoulos  thinks he is.

Ironically, in the fucked up era of Donald Trump, so stupid is Alex Jones and his Elmer Dinkley army, that they claim Bill as hero of the alt-right, going so far as to claim Alex Jones might actually be Bill Hicks, reincarnated, and that InfoWars is the word of Hicks … It’s Not!
If anything, if the stone were to be rolled away, and Bill were resurrected, he wouldn’t waste the time to shit on Alex Jones and InfoWars … both too stupid to live.

The flag-burning portrait of Bill, shot in the mens’ room at the Palm Beach Daily News, where I was an editor at the time, had been scheduled as the cover of posthumous box set of Bill’s four performance CDs (Dangerous, Relentless, Arizona Bay, and Rant in E Minor). However, considering the picture “unpatriotic” and “offensive,” Bill’s evangelical Christian parents refused it’s publication.

In the end, the (Rhino Box Set) project was never realized … the recordings were later released individually.

As Bill often said on (and off) stage, his Southern Baptist parents were never really “fans,” thinking their son was too often pornographic, personally embarrassing, and fundamentally Un-American.

All true, except the Un-American claim. Bill was an unapologetic patriot who loved America, and passionately railed against the commercial, social, and political ills he believed were destroying the country he lived in and loved.

After his death (February 26, 1994), Bill attained something of a cult status, revered by the more open-minded, free-thinking, and inquisitive members of a younger generation, those likely to also know Miles Davis, The Beatles, Jimi Hendrix, Bob Dylan, Led Zeppelin, and modern-day philosophers, Noam Chomsky, Terence McKenna, and Joseph Campbell (“The Power Of Myth”).

If you’re interested, there is much more information (and of course, misinformation) to be found in books, documentaries, and on youtube. As I say, be warned that Bill is not for the easily offended, faint of heart, or dim-witted republicans, but if you appreciate honest, unfiltered, and viciously funny social commentary, put the kids to bed, strap in, and ENJOY THE RIDE.